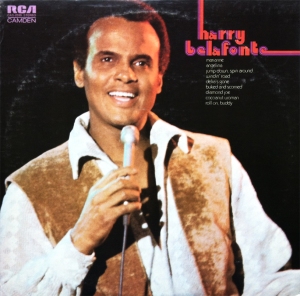 Bring home the gift of timeless music with this collection of Harry Belafonte favorites. With this limited time offer, you can enjoy such chart topping classics as, Jump Down, Spin Around, Angelina, Cocoanut Woman and many more! Not only is Harry Belafonte a handcrafted compilation of previously released material, it’s also pressed on dynaflex, which as you know is:

The RCA trademark for a new development in record manufacturing that provides a smoother, quieter surface and improved ability to reproduce musical sound. This lightweight record also virtually eliminates warpage and turntable slippage.

If you have a gracious heart, a knack for smooth Jamaican rhythms, and $0.49, Harry Belafonte could be yours! Act now and receive Belafonte for just an additional $0.42! 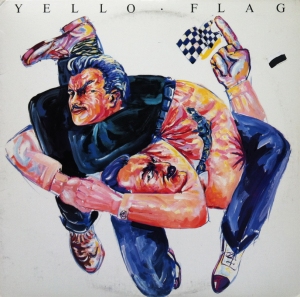 Like so many kids I grew up with, Yello was first introduced via the 1986 John Hughes classic, Ferris Bueller’s Day Off. It’s difficult, at least for me, to imagine Ferris gallivanting around scenic Chicago without the “chicka-chicka” pounding from Yello’s Oh Yeah. 1988’s release, Flag finds Dieter Meier and Boris Blank adopting their heavily produced, dance-tronic, belly-rubbin’, baby-making electro structure from their previous five albums (only two of which I have). So, nothing new, but still quality ear juice.

It’s difficult to shove Yello into one category. Many of you will say categories are for suckers and fans of Greatest Hits albums anyway, but when describing any band to someone who has never heard of them, it’s handy to be at least somewhat accurate with the broad, descriptive brush strokes. Here’s how I would describe them (probably incorrectly): If industrial and early 80s synth-pop had an illegitimate baby-child that grew up loving heavy percussion and smoked way too many cigarettes, but whose knowledge is endless and spans international waters, this magnificent beast would give out the best candy on Halloween and would go by the handle of Yello. Yeah, that’s close enough. Personally, I prefer 1983’s You Gotta Say Yes to Another Excess, but any Yello is good Yello as far as I’m concerned.

One by Dirty Vegas isn’t near as dirty as you would like to think. Boasting as hard-hitting, blood-spilling, sweat-soaked, body-beats for the proverbial “good time seeking” fornicator, instead comes across as the equivalent of a firm handshake from your sister.

Certainly not to say the grooves are not spin-worthy. This is lighthearted, feel-good, dance-happy, PG music suitable for Jr. High dances where the only objective is to make eye-contact lasting longer than a brief glance, and/or the elusive holding of the hands. Adults are forged from the adolescent ashes of those hopelessly hopeful who think Vegas has ever been this clean.

Editor’s note: I’m not gonna’ lie. I’m getting monumentally bored over here. Today’s post was another fleeting attempt at trying something new… and failing miserably. Sin City Has Never Been More Vanilla was randomly generated from the seemingly pointless “Random Item” button offered by Discogs. For those of you who don’t Discogs, the “Random Item” feature displays a random item from within your collection. So, there you have it. I clearly should have stayed in bed.