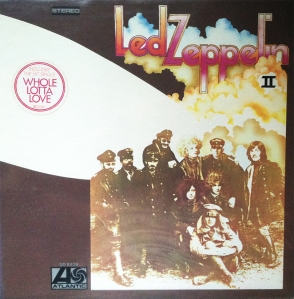 Stuck at work and running on minimal sleep, I opted for a few extra moments of shut-eye and neglected to photograph an album for today’s post. Teamwork being tonight’s theme, I enlisted the help of my SO to pick any record in the collection, take a picture of it, and send it my way. Having free reign of nearly 3000 records, she (my SO) sent over the picture to the left, and with it, a little story. Much to the dismay of my loving and beautiful SO, I’ll share that story with you now…

(Sent via text) “This was the first Zeppelin album (read: cassette tape) I listened to. I think it was 7th grade. Some of the boys had a “band” and were going to play Stairway to Heaven at a gathering of some sort and they asked me to sing. I realize that’s not on this album, but it’s a little trivia for you :). I ended up not singing :(.”

(Then, asking her why she didn’t sing, I thanked her for writing today’s post. She added) “It’s not even on the record! I don’t remember why. I didn’t have a lot of rehearsal time with them and we didn’t plan it out well… being 12 and all. I think they ended up playing Kashmir instead? Or else they tried Stairway but the guitar solo was less than fabulous? I forget. It’s been, like, 20-some years! Uhggggg I can’t believe it’s been that long.”

And this has concluded, the first ever… Teamwork Tuesday.