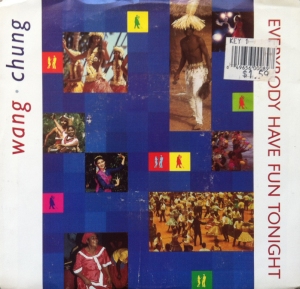 I think people overlook Wang Chung, or at least they’ve forgotten about them amongst the economic woes of 2013. Everybody Have Fun Tonight is, among many other things a brilliant marketing technique that associates having fun with Wang Chung by, wait for it, rhyming “have fun” with “Wang Chung.” See what they did there? Clever bastards!

These guys aren’t domestically minded either… these British chaps are international: across the nation, around the world… Wang Chung wants EVERYBODY to have fun tonight. And the joy of this song as I see it, is that, ok, I’ll put on this 45, rock out with my New Wave British mates, and potentially WILL have fun tonight. Cut to tomorrow morning and the usual “what the hell happened?” After a shower and a shave, I’ll play this same 45 and BAM! Tomorrow night is another night to have fun! I tell you, Wang Chung were geniuses!

If “fun” ever had a theme song, Wang Chung nailed it. I know this is redundant but quite simply, all Wang Chung wants is for everybody to have fun tonight. A bit of a tall order? Sure, but hopefully optimistic? You bet your 1986 stonewashed-jean-wearing ass!

Why this isn’t the most popular song in the world I’ll never know. The next time you’re in the mood to “have fun,” remember who your sponsor is… it’s Wang Chung!

The B-Side to this 80’s time capsule is a Everybody Have Fun Tonight remix of sorts; a couple swaying closer to a fun filled night. I imagine New Wave chicks with their New Wave heads resting on their New Wave boyfriend’s New Wave shoulders as they slowly oscillate amongst a sea of other New Wave couples in the wee hours of a New Wave morning in someone’s New Wave flat, all the while listening to Wang Chung’s musical nightcap, Side B’s Fun Tonight: The Early Years.

There is something to be said about New Wave. What that is I have no idea. 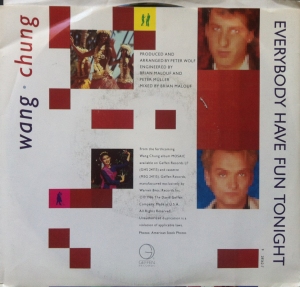 2 thoughts on “Single Review: Everybody Have Fun Tonight by Wang Chung”