There are certain compilations that come out with the intent to capitalize on various social trends. The most popular of these could be the Nuggets compilation (a groovy series showcasing the one-hit-wonders of the bygone psychedelic days), the Now That’s What I Call Music! or simply Now! compilations (a grotesque series of comps for people who loath and despise everything creative about music), and those compilations that are hastily put together and distributed with the intent to sell as many copies as possible before the trend dies and becomes a stepping stone for the next “cool thing.” Electric Breakdance is, in my opinion, just about the best stepping stone compilation ever to hit the big city streets, and/or the hardwood floors of my parent’s living room.

Electric Breakdance was released with the intention of showcasing the techniques found within the art of breakdancing, while at the same time presenting a soundtrack of “the hottest breaking music on the street.” BUT, unlike many “As Seen on TV” comps, Electric Breakdance actually delivers with its 9 tracks of hard-hitting early 80’s Hip-Hop. 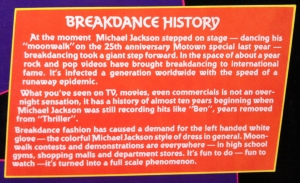 Featured on this break-tastic single LP are tracks by Run-D.M.C., Grandmaster Flash & Melle Mel, Whodini and a slew of other early Hip-Hop acts that I’m now bound to explore. The dopest track (is my rural Wisconsin showing?), or the smash single amongst an album of smash singles is Grandmaster Flash & Melle Mel’s White Lines (Don’t Don’t Do It), which is basically a song about freebasing. You’ve gotta’ love early 80’s radio.

It’s heartbreaking and extremely unfortunate that I don’t have the “giant detailed poser on how to break.” That little educational gem of early 80’s fashion would be nothing short of amazing framed on my living room wall (I’m sure my girlfriend would LOVE that).

Overall, Electric Breakdance was a welcoming surprise when I discovered it at a Goodwill, hiding between a Steven Stills LP and the soundtrack to Xanadu (both of which I also purchased). Although my breakdancing never left my parent’s smooth-spinning hardwood floors, the art of breaking will never be too far away from my heart.

Along with a brief write-up on the history of breakdance, the back cover offers the following disclaimer… in tiny print:

If you have any ankle, knee, back or other physical problems, you should have a medical checkup before attempting the dances described in these materials. Parental supervision is advised for children who attempt these dances.