The Ric Ocasek produced Weezer (the band’s third album, which is not to be confused with their first… or their sixth) was released in May of 2001, and sported three, summer singles (AKA the soundtrack to the 2001 summer) with Hash Pipe, Island in the Sun, and Photograph. I was living in Milwaukee at the time, and not that one tried, but one could not escape the constant one-two punch of Hash Pipe and Island in the Sun, the latter being featured in the Mary-Kate and Ashley Olsen film, Holiday in the Sun. I feel I must add here, that this Holiday in the Sun knowledge is present only because I was working at a Hollywood Video at the time, and not a frequenter of anything Mary-Kate or Ashley Olsen.

The Green Album, as it is often referred, was a return to form (not only in name) of the blueprinted pop classic, 1994’s Weezer. Pinkerton, the band’s second album, still remains a personal fav, but for the summer of 2001, everyone was seeing green. 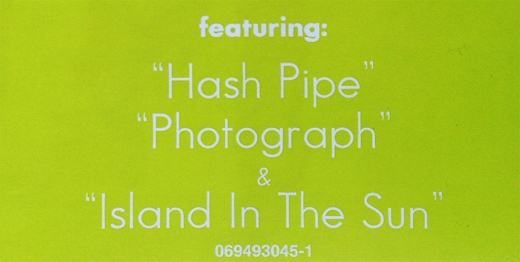