Back in ’92, and a whole three years before the digital video disc was invented, LaserDiscs were considered, across the videophile nation, to be the best quality home consumer video format that money could buy. Leave it to the Beastie Boys to tackle this medium to promote a collection of their classic music videos, appropriately titled, The $kill$ to Pay the Bill$. Nabbing its title from the a bonus track to the So What ‘Cha Want single (release June 2nd, 1992), The $kill$ to Pay the Bill$ may very well be the best non-album track, aside maybe for Mullet Head, that the trio ever released, and is a fitting handle for this 12 video comp. 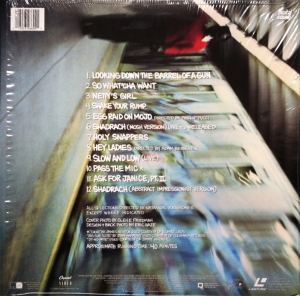 One of only two LaserDiscs that I kept after the great liquidation of 2012 (the other being the Criterion Collection release of Dr. Strangelove), The $kill$ to Pay the Bill$ is a perfect relic of early 90’s distinction. What’s a seemingly intentional snub to the fans, however, is the omission of the video from which this collection derives its name. Shameful punks!