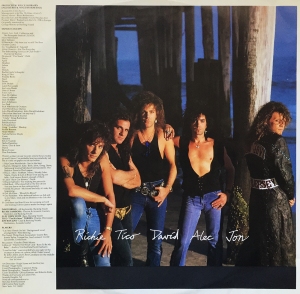 Reason no. 1309 justifying the existence of the Groove. I had stupidly, and for years, considered Wanted Dead or Alive a cut from 1988’s New Jersey. Having freshly experienced this angelic gem on LA radio the other morning, I found myself dodging lolly-gagging traffic on my escape home in order to spin Bon Jovi’s 2nd consecutive no. 1 album. To my reluctant surprise, Wanted Dead or Alive was nowhere to be found on ’88s NJ. Once again, and stupidly, I was reminded that WDoA was a / the seasoned favorite from 1986’s Slippery When Wet LP. I figure the moral is, grease up on your Bon Jovi history, fool!