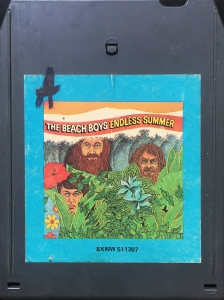 Endless Summer is a compilation album of Beach Boys classics from 62-65, released in 1974. It sold over 3 million copies. I own two. One, a double LP and two, this 8-track cartridge. I don’t use the word cartridge enough. Moving on… the LP version comes with a poster. The 8-track however does not. Endless Summer would spend a crazy 155 weeks on the Billboard album chart, and would become the band’s 2nd chart-topping album. It has an anniversary coming up. June 24th, for whatever that’s worth. But since we here in Los Angeles are suffocating under a blanket of fog (ol’ June Gloom), let’s look to another source of light for our summer entertainment. Even if The Beach Boys aren’t your bag, Endless Summer is certainly a must-have, in any format.