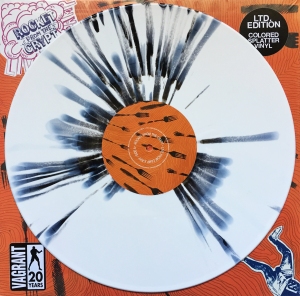 For (what seemed like) an eternity, Rocket from the Crypt’s 2002 album, Live from Camp X-Ray (their 7th studio offering) was the last, resonating voice any of us heard from the world’s best live band (2003’s 2-track On the Prowl was nowhere to be found, at least as far as rural Wisconsin was concerned). As a ranking place in their catalog, it sits near the bottom (1998’s RFTC bringing up the rear), but it stood out, if only for the obvious reason, that it was the last-new Rocket thing heard. Since their hiatus, the band has released a handful of (mainly single-sided) 7″ records, in addition to a live recording of their “last” show from Halloween, 2005 and another All Systems Go compilation (their third), but Live from Camp X-Ray (not a live album) still stands as the band’s last studio album. Anyway, Vagrant Records still has copies of their 20 Years series up on their site. Nab these color variants while you can. This album, with all its faults, is still a classic.