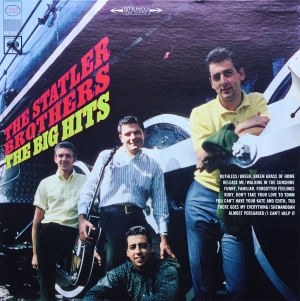 Sing the Big Hits was The Statler Brothers’ 2nd studio album, released in 1967, and it contains two tracks that would make their 1972 double LP compilation album, The World of the Statler Brothers, with Ruthless, a fun play on words track about a former lover, Ruth, no longer being around, and another playful tongue-twister, You Can’t Have Your Kate and Edith, Too. Flowers on the Wall, the band’s first album, still remains no. 1 on my “to-get” list, but I’ll enjoy their sophomore effort in the meantime.