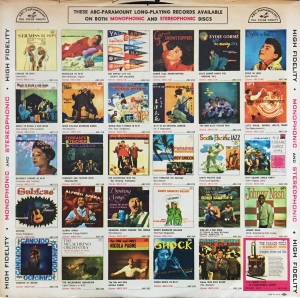 ABC – Paramount Records released vibrant inserts with their records back in the mid-to-late 1950s. This one in particular is (roughly) from around 1958. What catches the eye is the inclusion for Shock Music in Hi-Fi by The Creed Taylor Orchestra. This would be Creed Taylor’s debut release, almost a full decade before launching CTI Records (Creed Taylor Incorporated), a subsidiary of Herb Alpert’s A&M Records. Long story short, Shock Music in Hi-Fi just jumped to the top of the “must have” list.