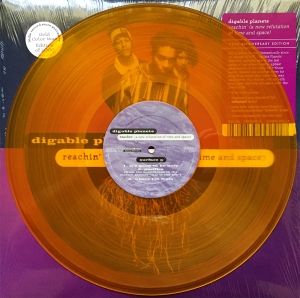 I’d been holding out for an original pressing of Digable Planet’s debut, 1993’s Reachin’ (A New Refutation of Time and Space), that was, until I discovered this limited gold vinyl 25th anniversary reissue from February of this year. As the first official vinyl reissue, this double LP is limited to 1000 copies worldwide, and doubles as an “Indie Record Store Exclusive” which is exactly where I found it. The Planets released a total of two studio albums (spanning 1993 – 1994), both of which are essential owns. Next up is 1994’s Blowout Comb, which I’m hoping will get the same 25th anniversary treatment next year.

One thought on “Golden Planet”