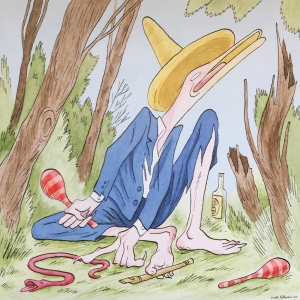 Presented here is an original piece by Norwegian designer Bendik Kaltenborn. It appears inside the 2014 disco record, It’s Album Time by Terje Olsen, aka Todd Terje. In addition to the album’s cover, back jacket, and insert, Kaltenborn has produced illustrations for The New Yorker magazine, as well as a slew of other Todd Terje record releases (The Big Cover-Up and the 12″ single Spiral come to mind). Check him out. He’s certainly a name to remember.