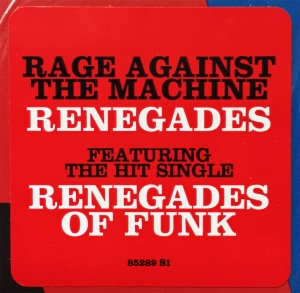 Get hyped for this circa: 2000 collection of Rage-infused covers of Cypress Hill, Devo, Bob Dylan and Minor Threat songs (among others, included Renegades of Funk by Afrika Bambaataa). The album for which this sticker does its dance was the last by this prolific band, and was released a full two months after their breakup. Hyped yet? Renegades… an almost two decades-old conclusion to a short-lived and necessary implement of 1990’s subculture. Keep your stickers, kids!