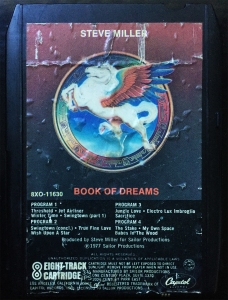 1977’s Book of Dreams was The Steve Miller Band’s 10th studio album, and arguably their most prolific release. 7 of the tracks would appear on the band’s Greatest Hits 1974 – 1978 album, which appeared just a year after Book hit record store shelves. The classic Jet Airliner is the obvious standout (or Jed & Lina, depending on who you ask), but Book also contains the party-favorite Jungle Love. In all, it’s no question, given the outrageous success, that this album would appear on multiple formats. Presented here is a newly acquired 8-track. Same track order as the vinyl release, save for Swingtown which is broken into two parts. No joke, The Steve Miller band hit it huge with Book of Dreams.