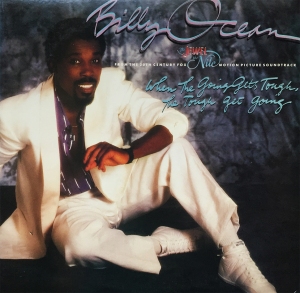 If you don’t remember Billy Ocean, the 80’s, or the sequel to Romancing the Stone (The Jewel of the Nile), then you don’t remember your history. That’s right, I said it. Bring back your white socks, slacks, high tops, and sports coat, and let’s everyone just get our shit back together.

I’ve recently found… that “tough” in fact, ISN’T spelled with an “8” (to8gh). That’s just something I’m going to have to learn to live with. IN THE MEANTIME… whatever happened to Billy Ocean?!

1986 was arguably the best year of my life. It was the year I got married, produced a beautiful young daughter, Chelsea, and it was the year I was nominated for my first (and only) Pulitzer.  Ok, so NONE of these things happened to me in 1986, but what DID happen were the beginnings of a battle that still continues today… a grand crusade of international proportions. I am of course referring to Billy vs. Lionel and the Ceiling Dancing Zone of Love.

There’s a lot of love going on between the singles, Love Zone and Dancing on the Ceiling. Let’s first look at Billy Ocean’s Love Zone.  The Love Zone is a safe place; a quarantined section blocked-off and geographically located between the Hate Zone and the Dead Zone. Given these other zone options, the Love Zone is the preferred zone by the majority of the zone-based community. The A-side to this single comes “from the smash hit album Love Zone” while the B-side is the instrumental version of Love Zone. The B-side offers a little less love, but still comes across as lovely.

Lionel Richie’s single, Dancing on the Ceiling, isn’t as immediately love-tastic. I mean, who LOVES dancing on the ceiling? I myself have never danced upon the ceiling, but “love” wouldn’t be the first emotion that comes to mind. I’m convinced Dancing on the Ceiling is the result of a drug-induced, debaucherous weekend that found Mr. Richie taking a break from his then 5 year old daughter, Nicole, to mainline a rented hotel room full of narcotics that made him feel as if he were “dancing on the ceiling.” We can all be grateful for that hit single inspired weekend. Oh, the love connection (remember that show, The Love Connection?) can be found on the B-side’s, Love Will Find A Way. That’s a good point. Love often DOES find a way, but seldom within the Hate or Dead Zones.

So, given Billy Ocean’s safe haven of zoned love and Lionel Richie’s (completely fabricated) weekend of ecstasy and ceiling dancing, it’s safe to say this is a battle our grandchildren will need to settle. I mean, could YOU decide between these two heroic poems?