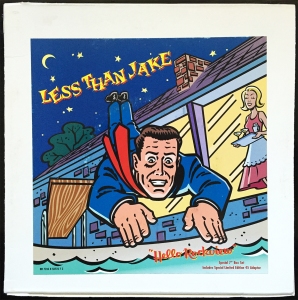 Back in 1997, alligator-fighting, pop-punk Floridians Less Than Jake released their third studio album titled, Hello Rockview. 1998, in all its majestic glory, saw a reissue of Rockview in a 7x 7″ box set, featured here. It shames me, but I haven’t heard this album (series of 7″ records) in nearly 20 years, having purchased it from a forgotten record shop in Milwaukee, roughly around that time. I’ve sold many records, for many reasons, throughout the years, but I’ve kept this box set. Something (something?) tells me, it was for good reason.

Grease, done Floridian pop / punk / ska style, which is, of course, a favorite for everyone. #whenwillyoucrack?