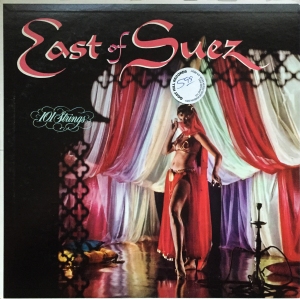 Jabba the Hutt’s taste in women derives from the Red Sea shores of this north-eastern Egyptian city, or so it would appear from the cover to 101 String’s 1959 space-age pop-jazz compilation, East of Suez. Perhaps slave women apparel is globally standard and I’m just catching on, or, per chance, it’s that Mr. The Hutt has a very distinct taste in his slaves’ swimwear. If you’re in the market for orchestral mood music with a provocative, Egyptian undertone, look no further than East of Suez.

Was a defocused Adam Ant ever a sex symbol? This 1983 cover of Strip certainly suggests that over 30 years ago, he was. I was busy acting out my favorite scenes from Return of the Jedi with my Jedi Luke Skywalker (with green lightsaber) and Jabba the Hutt playset (with snub-nosed Salacious Crumb) at the time, so this obvious monument of male sexual prowess escaped me. 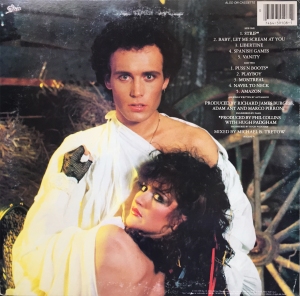 I’ll admit that I went through an “80s” phase about a decade ago, and managed to gobble up any and every early 80s pop album I could find. I’d been the proud owner of Adam Ant’s B-Side Babies back in High School, and figured that expanding my Adam Ant collection was a logical endeavor. Strip, with its chart-climbing single, Puss ‘n Boots (which was co-produced by Phil Collins, I’ll have you know) was Mr. Ant’s 2nd solo effort after ditching the Ants in ’82.

Sex symbol or not, Stuart Leslie Goddard (aka Adam Ant) made some pretty damn good pop music throughout his career, and although B-Side Babies never received a proper vinyl release, it comes HIGHLY recommended.