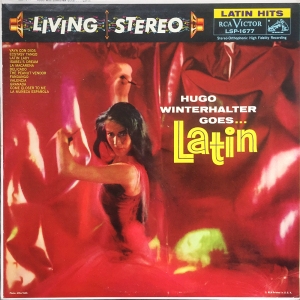 So, as it turns out, the lesser-known Hugo Winterhalter was an arranger for such household names as Tommy Dorsey and Count Basie back in the 1930s before branching out into his own easy listening jazz career. This 1959 album, Hugo Winterhalter Goes… Latin features 12 tracks of Latin fury, and owns classic, mid-century cover art. With RCA Victor’s Living Stereo, you’re sure to experience Isabel’s Dream and Ectasy Tango in high quality fidelity.

No, not the fun loving, prehistoric Snorkasaurus from Bedrock, but instead, the golden-throated matador, and decades old wearer of many hats, Dean Martin. Originally released in 1961 by Reprise, Dino Latino takes the Italian American south of the border for a stampeding collection of Latin gems. Check it out, if only for the outlandish cover.