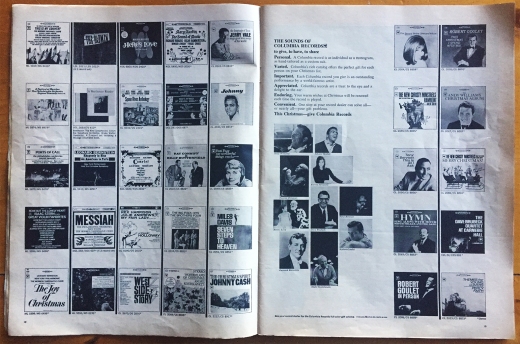 Here is a double page insert from Columbia Records by way of the December 6, 1963 issue of Life magazine. Though the issue focuses (and rightfully so) on the then recent assassination of Mr. Kennedy, this particular issue is chock-full of music-inspired holiday gift ideas, such as the layout above. I’m in the market for this particular magazine (happened upon it at a cabin by the lake), but was sure to take plenty of photos of its wonderful, 54-year-old contents.

Was flipping though a November, 1969 issue of Life magazine last night, you know, the one with “The Rough-cut King of Country Music” on the cover, aka Johnny Cash, and I came across this amazing full page ad for Time Life Records’ 6x LP box set, To the Moon. I’d acquired this piece of Americana at my brick and mortar about a year ago (the box set, not the magazine… I have my wonderful folks to thank for that one), and I’ve been a bit obsessed with it after the reissue announcement of the Voyager Golden Record box set (Kickstarter), so let’s just say I was a bit beside myself and had to do a double take upon its random discovery in the Life magazine that had been sitting on our living room table for the better part of three years. Man can step foot on the Moon, but I can’t discover a 47 year old record advertisement sitting beneath my nose. For shame.

Anyway, have a read, then head over to Discogs to nab this essential box set for next to nothing. She’s currently $7.50 for the full set (that’s 6x LPs and a 192 page, hardcover book, kids), and if you’re feeling REALLY interplanetary, back the Voyager Golden Record on Kickstarter. You’ll thank me later.

November 21, 1969 was a good day as far as casual reading was concerned. The Man in Black, lounging next to a locomotive, fresh off the heels of the At Folsom Prison album… well, who could possibly pass up this write-up… and that’s exactly what LIFE magazine thought.