The day: Saturday, April 21st, 2001. The venue: Chicago’s Metro. The event: International Noise Conspiracy opening up for Rocket from the Crypt.

It had been two, LONG years since I’d last seen Rocket from the Crypt in concert. I had been living in Milwaukee for little over a year at this point, and in that time, when San Diego’s finest came within driving distance (essentially any venue in any state bordering Wisconsin), you dropped whatever you were doing and you got your ass to the show.

This was the third time I’d seen Rocket from the Crypt, and before even fueling up the car to head some 90+ miles into Illinois territory, I had already made up my mind that, amid the enormous amount of live acts I’d seen up to that point, no other experience had topped the raw and ecstatic vigor of Rocket from the Crypt. I’ve seen a plethora of shows since that cloudy spring day, and my assessment has since proved to be 100% accurate.

Being an avid Refused fan and never having the esteemed opportunity to see them perform live, my youthful self was barely able to contain the restless fever of seeing Refused’s frontman, Dennis Lyxzén and his new, post-Refused band, The (International) Noise Conspiracy. To see a fraction of Refused open up for the greatest live act I had, and would ever see, was enough to blow the feeble mind of my 21-year-old self. 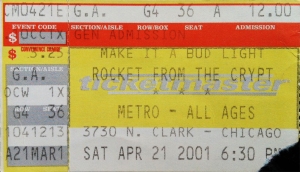 I escaped the evening intact, but only barely. It would be exactly 3 months (July 21, 2001) until I saw Rocket from the Crypt again, and I had to close the Hollywood Video where I worked an hour and a half early in order to do so, but that’s a story for another time.