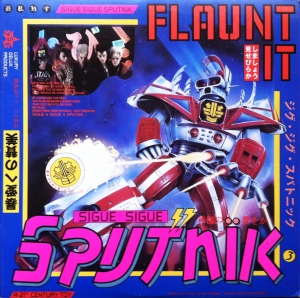 The year was 1986, and it was about (damn) time that Ferris Bueller took (another) day off. Kicking off the alluring, and jaw-dropping, sex-rocket album, Flaunt It, Love Missile F1-11 owns the distinct pleasure of (indefinitely) changing the unforeseen boundaries of music’s indefinable landscape. Nothing before had been conceived, and few since carry the weight of changing one’s perspective on “what music can be” in a simple four minute and 48 second electro-mind-grinding lullaby.

If you’ve seen the John Hughes masterpiece, you’ve heard Love Missile F1-11. Kicking off with the (often) repeated phrase, “I wanna be a star!” this synth-happy, loop-clinging, guitar wailing love tune does (very) little to disguise its overtly sexual (over/under) tones. The line, “Shoot it up!” does not refer to any form of dragon chasing. “There goes my love, rocket-red.” You get the idea.

Sampling Mozart, gunshots, (what sounds like) ray guns, and perfectly timed explosions, Love Missile F1-11 is a seizure –inducing wall of sound that forces you (the listener) to (mentally) salivate and knock over old ladies who may stand in the way of another breathtaking fix.

Sigue Sigue Sputnik is certainly NOT for everyone, and prodigiousness wouldn’t have it any other way.