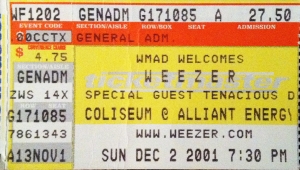 Weezer > Tenacious D in just about every conceivable equation, except for live performances. Pinkerton, the Blue Album, and to some extent the Green Album, are examples of some of the best pop-rock to hit the 90s and early 2000s. The D’s debut is flawless, but 2006’s The Pick of Destiny is virtually unlistenable. I was primped and properly anticipating one of the best nights of music entertainment I’d ever witnessed, that dreary day back in late 2001, but I left feeling unfulfilled by the mighty kings of Weez. Not knowing what to expect, and marginally perplexed by the unconventional pairings of these two seemingly unlinkable bands, I walked away, past a sea of parked, vacant cars, wishing the D had been the headliner. Subdued, shoe-gazing, stand-still rock certainly has its place, but the 22-year-old version of yours truly wanted no part of it.