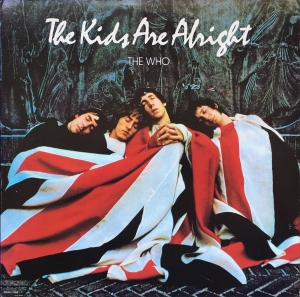 What we know: The Kids Are Alright is a delightful little track released by The Who in August of 1966.

What we also know: The Kids Are Alright is a rockumentary, featuring The Who, released in May of 1979.

What we also, also know: The Kids Are Alright is a double LP soundtrack to the aforementioned rockumentary, and contains some of this legendary band’s greatest hits.

The Kids… Are Alright

I used to love the Who. I used to love grape Nerds, tight-rolling my jeans, and collecting Rickey Henderson baseball cards. I can’t necessarily pinpoint when my love affair with the Who lost its passion, but I’ll never forget their fourth album, 1969’s Tommy. Rock operas aren’t my bag, to say the least, but Tommy, well, he’s a hard (rock) shell to crack, and I encourage anyone who hasn’t tested their endurance in a while to give it a solid shot.
July 28, 2015 1971 music, record collecting, records, The Who, vinyl, wax Leave a comment

The Prudent Groove (among several other members of his abundant family) welcome into this conscious, baby Leif (last name undisclosed to protect the congratulatory). The Who, you ask? Great companions and their adorable newborn. With all the extended family (read: friends) and their bulging, baby bellies, we pose the inevitable, Who’s Next?

With arguably the most recognizable keyboard intro to any track to kick off any album in all of rock (save maybe for Baba O’Riley), Freeze Frame, the title track on 1981’s appropriately titled Freeze Frame by The J. Geils Band took second seat to the the band’s most successful incarnation, Centerfold. That’s right, both Freeze Frame AND Centerfold are featured on this album. Shocking, I know.

The band’s sound (somewhat) drastically shifted over its tenure, but it’s humbling to imagine a band can (finally) hit its stride on its 12th album. The J. Geils Band would ride on the success of Freeze Frame (the album, not the track) for another two albums until calling it quits with 1984’s You’re Gettin’ Even While I’m Gettin’ Odd. For a damn fine radio-friendly example of early 80s mind-numbing awesomeness, check out Freeze Frame. Your yester-self (it exists) could use a solid, loving punch in the shoulder.