Though not usually a fan of Greatest Hits albums (I only own about 50 of them), decently priced Yardbirds albums are strictly difficult to come by, even those in almost unplayable condition. So, though I do own a few additional Yardbirds records, this one, their Greatest Hits from 1967, was for years my only taste of this (ever revolving) all-star band. Just for shits I priced 1964’s Five Live Yardbirds (the band’s debut), and VG+ copies are fetching for over $200. Kudos to those in possession of that gem.
June 27, 2018 1982 Jeff Beck, music, record collecting, records, The Yardbirds, vinyl, wax Leave a comment

This 1982 compilation record featuring Jeff Back and The Yardbirds was released in the UK back in 1982. The 10 tracks feature the band’s work between 1964-65, and is a must find for classic rock and blues rock lovers of all types. Though I much prefer my Yardbirds with a little Jimmy Page, this album is still a must-own. 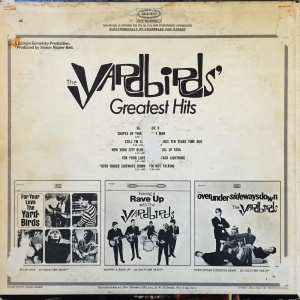 Released in 1966, or so I’m told, The Yardbirds Greatest Hits captures many of the band’s early British Invasion, blues rock chart toppers into one, neat, cohesive package. But we’re not focusing on this Epic Records release today for its global importance, but instead, for its previous owner’s lamenting admiration for the band.

As can be clearly seen from the five, strategically placed abnormalities on the back cover, this record’s original owner had this, and likely other albums displayed on a wall somewhere, likely in some dingy, smoke-soaked den of excess and euphoria (I like to think somewhere off the Fox River in rural Wisconsin). Five individually places strips of tape were all that was needed to hoist up this audio treasure, which was likely a decent conversation starter for 1966 hoods to drop out and over analyze over. Don’t Bogart that tape, my friend!

Cover distracted, ditsiness aside, The Beginning British Blues is a hint of British Blues history the laypeople (especially including myself) may not have otherwise been hip to. Bridging the Eric Clapton gap between The Yardbirds and Cream, the momentary glimpse of Clapton’s collaboration with John Mayall & the Bluesbreakers seems to be the bulk of the focus here. With back sleeve write-up by Jimmy Page (together with Miles Road, a duet with Mr. Clapton), The Beginning British Blues is a hidden treasure of historical significance, something this guy here just discovered he needed to possess.