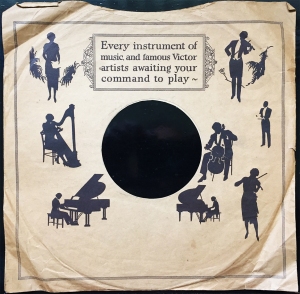 Victor strikes again with its overly simplified clip art cover for a vintage 78 sleeve. Every instrument of music, and famous Victor artist awaiting your command to play… ok, like, I’m in control, yeah? I “command” my string section to perform strictly for me, whenever, and for however long I’m willing to operate the crank. Actually, yeah… that sounds nice. Kind of consumerist royalty. Shut up, Victor, and take my money! 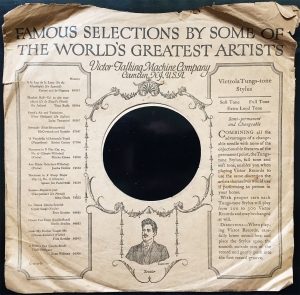 Famous selections by some of the world’s greatest artists, or so this Camden, NJ-based monster of a label would have you believe (Victor Talking Machine Company… yeah, they knew their shit). If you’re in the market for a brief history on available Victrola needles circa: the 1930s, the right column in the photo above is your best friend. There are several tone-options to choose from, so choose wisely, and choose often. 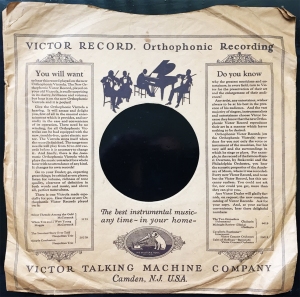 The word “orthophonic” is so outdated, spellcheck feels it is misspelled (damn you, spellcheck!). The first of its kind featuring records recorded using the new “electronically recorded” sound was first shunned by major labels, then, like an unearthed memory, embraced and regarded as a monumental leap forward in consumer-based, reproduced sound. Making waves as early as 1925… nicely done, Western Electric.

So, what’s the deal with Victor Records? A thought that troubles each and every one of us as at some point (I assume), so let’s hear it straight from the His Master’s Voice:
Victor Records and Victrolas are scientifically coordinated and synchronized in the processes of manufacture and are made for use together. They should be so used to secure a perfect reproduction. The Victor Company’s pictorial trade-mark “His Master’s Voice” affords a ready means of identification; look for it – on the record labels and inside the lids of Victrolas. For best results this record should be played only on a Victor instrument.
August 26, 2014 Label Focus Camden, music, New Jersey, record collecting, records, Victor Records, Victor Talking Machine Company, vinyl Leave a comment

Founded in 1901 (only 113 years ago… no joke), The Victor Talking Machine Company manufactured 78s at an astounding rate, and became one of the leading producers of recorded, audio material. Basing itself in Camden, New Jersey (I know, right?!), “His Master’s Voice” (the historic and legendary logo with Nipper, the dog) has become as synonymous with record listening as its been with the history of record recording.

She may have died in 1929, but Victor Records still exists today under the umbrella of those Sony kids. Passion for the yesteryears need not be forgotten.