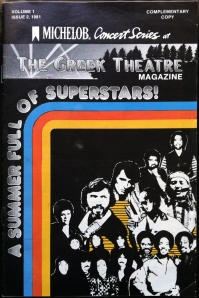 Now, I’ll be honest and say I’ve never really pondered the notion, spun the groovy hamster wheel of imagination if you will, of what mainstream acts may have performed at Los Angeles’ legendary Greek Theatre in say, the summer of 1981. Call me old school, or whatever the kids are saying these days, but the idea never really crossed my mind. Thankfully, the previous owner of my copy of Harry Belafonte’s Harry Belafonte preserved this little time capsule-nugget-thing neatly away into the sleeve for me to discover some 30 odd years later. THANK YOU, OH GREAT AND WISE YESTEROWNER OF HARRY BELAFONTE’S HARRY BELAFONTE! THIS LITTLE 21-PAGE MAGAZINE IS NOTHING SHORT OF MYSTIFYING AND PROFOUNDLY ENJOYABLE! (I believe in giving credit where credit is due.)

Anyone want to hit up Doc Brown to see if we can borrow his GMC and head to the Greek to see Pete Seeger & Arlo Guthrie perform? Or how about Harry Belafonte with special guest Letta Mbulu? I know this guy who’s just sitting on a box of plutonium, so no need for gas money. The first round of Michelob is on me! 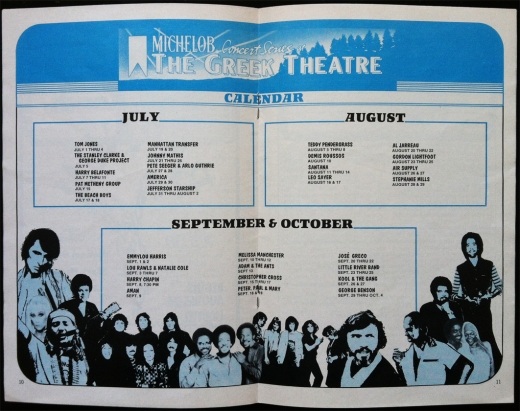