I’d not heard of music by, or the name of Nick Waterhouse before agreeing to double date with a few close coworkers a few years back. To my subtle surprise, Nick Waterhouse puts on a friggin’ hell-of-a show! Backup singers, crooning vocals, hip-swaying rhythms… it was a perfect and unexpected, rather chilly evening that left me a lifelong Waterhouse fan. It doesn’t hurt that Nick fancies the wax, and was offering a tour-only cover variation to his 2016 album, Never Twice. If you’re into 50’s rhythm & blues, with a hint of fire, Mr. Waterhouse is your man. 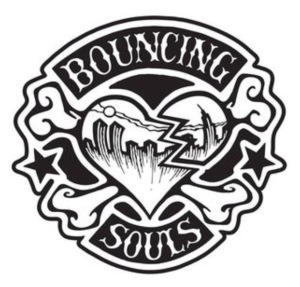 These New Jersey mooches… These Yoohoo-drinking, rooftop toilet-throwing, adolescent-minded seniors of punk are coming to Los Angeles in May… and we just secured tickets (Thanks, Kyle!). I can’t wait to hold an overpriced beer and spit snotty lyrics at top volume in the back of an overcrowded room along with this seminal band, surrounded by like-minded idiots of similar and sophisticated taste. It’s comforting to see these punk elders still arousing the crowd into a much-too-short “East Coast, fuck you!” call and response. (Photo cropped and ripped from my phone and provided by, I suppose, the Bouncing Souls?) Check ’em out. 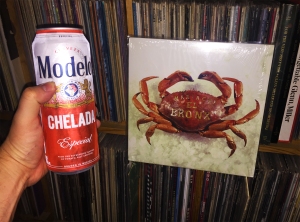 We made tortillas and salsa over the weekend, so it was, of course, fitting to spin some Mariachi El Bronx. Turns out, this copy of their first album, self-titled, fetches a hefty sum online. As of right now, only 390 people on the Discogs community “Have,” while 338 people “Want.” Oh, yeah! The fruit beer! It was a first for me, and was equal parts “interesting” and quite tasty. As an aside, both the tortillas and the salsa turned out near perfectly, so that’s something.

Wish I could make this hoppin’ holiday installment of the Liquid Kitty / Harvelle’s Punk Rock BBQ, but with family and friends pulling out all the stops, we’ll need to sit this one out. I hope those of you in the Los Angeles / Santa Monica vicinity enjoy this free, cheap-ass show! (Photo courtesy of Liquid Kitty’s Facebook page.) 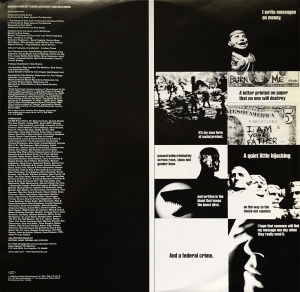 Also eligible for induction into the R&R HOF is Los Angeles’ own Rage Against the Machine (seems like I’ve been touching base with them quite a bit lately). Again, voting ends 12/9, so don’t delay! As an aside, or really, the point of this post, this two-parter, is a politically-charged suggestion by the band, from their Renegades release, about the pros of defacing domestic currency. Presented here is the first side of the Renegades insert. For a brief definition of defacement by means of the U.S. Department of the Treasury, continue reading.
Defacement of Currency
Defacement of currency is a violation of Title 18, Section 333 of the United States Code. Under this provision, currency defacement is generally defined as follows: Whoever mutilates, cuts, disfigures, perforates, unites or cements together, or does any other thing to any bank bill, draft, note, or other evidence of debt issued by any national banking association, Federal Reserve Bank, or Federal Reserve System, with intent to render such item(s) unfit to be reissued, shall be fined under this title or imprisoned not more than six months, or both.
October 16, 2018 2005 Los Angeles, music, record collecting, records, The Funky Chemist Records, The Pharcyde, vinyl, wax Leave a comment 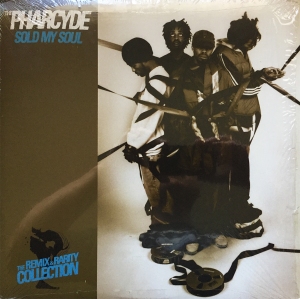 2005 saw the 3x LP compilation release (Sold My Soul), a catch-all, smash track, greatest hits, of sorts, by Los Angeles pretty-boy-hoodlums, The Pharcyde, and was released on the extremely short-lived The Funky Chemist Records label (they only produced five records, including this one). Little-to-nothing can be found about this label (from a quick, Google / Discogs / Wiki search), but these 24-tracks are a fantastic place to start for the casual Pharcyde connoisseur. It was also released in compact disc, if that’s more your bag. 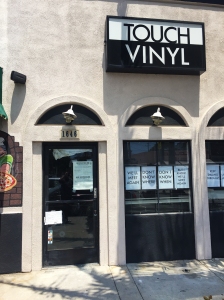 Well, this comes as a bit of a surprise to me and my wife, but there was an electrical fire at one of our neighboring brick & mortars back in November. Touch Vinyl was affected, and hasn’t been open since. We stopped by, without knowledge of the fire, which prompted an immediate internet scouring for “answers.” RIP Touch Vinyl. May the next stage in your evolution be a sound one.

Woah, Nellie! This never before released 6-track EP from 1965 is a much needed breath of fresh air among the cloudy boulevards of smog city. Not since 1981’s Unforgiven (an uncompleted album) have we heard anything new from legendary songwriter Tim Hardin. Forget all the bells and whistles about the 45rpm, limited numbered edition, 180 gram vinyl, blah blah blah… THESE ARE NEVER BEFORE RELEASED SONGS BY TIM (MF) HARDIN! Obtain immediately, and at any price. 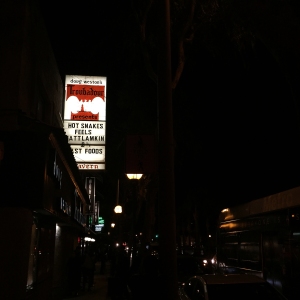 Day 2 of the 2017 Hot Snakes tour. Sold out show at the Troubadour. The new tracks were massive. Looking forward to the new album! 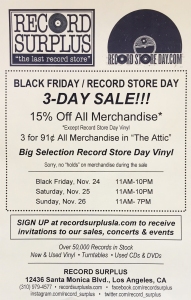 I completely forgot about Black Friday! What the hell is wrong with me?! It may have been the 16-day work stint I just finished. 19-hour days are for the birds. What month is it?

Neil Diamond struck it rich with his 1970 live album, Gold. This is a 1973 reissue, but the material is the same as that on the original 1970 album (for those caring to know such things). The material was recorded on July 15, 1970 at The Troubadour in Los Angeles (a great, and relatively small venue). It’s a great listen, but don’t take my word for it. Extinct trade magazine Cashbox had this to say in October of 1969: “On stage Diamond radiates the same excitement that has made pop stars from Sinatra to Presley, and it’s a sensation that can’t be described, only felt.”

The Budos Band and The Kinks. Two of the best “The” bands in our collection. This concludes the Casual Cabin tour as we make our way down the mountain and back into modern society. Enjoy your day, kids.

Jim Croce, triple IPA, and a little lamp with a flickering fireplace for a base. To the simple things, kids! 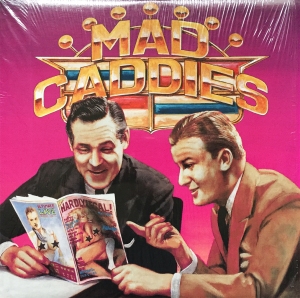 Looking forward to some Santa Barbara mischief this evening at the Roxy. I haven’t seen the Mad Caddies since around 1999 (my God, has it been that long?!), so tonight should prove to be a profound and nostalgic experience. But who knows? They’re getting old too and may just phone it in. Likely not, but a fun notion to ponder. If you look down and find yourself standing in the Los Angeles area this evening, head on over to The Roxy. Tix are still avail. Cheers.

Tickets are on sale for the 4th Annual Horton’s Hayride, kids! Good ol’ Port of Los Angeles… that’s Pedro, baby! Mike Ness, Face to Face, Cutty Flam, and of course, the Reverend. See you squares there!

Los Angeles-based Celtic punks Flogging Molly entered the entertainment bubble with their debut studio album Swagger back in 2000. The album would be critically acclaimed for their folk / punk / oi mix, and would represent a prolific start to a 17+ year career, up to and including 2017’s Life is Good. Late nights are prime hours to spin Flogging Molly, be it Swagger or otherwise. Just make sure you have enough whiskey on hand.

I call this one: Me First and the Gimme Gimmes live, and in person at The Fonda Theatre in Los Angeles on May 13, 2017.

Very strongly considering what would, just a few short years ago, have been a no-brainer. Shows during the week these days… am I right?!