Back in 1980, Jerry Reed released a 10-track collection of classic Jim Croce songs titled, Jerry Reed Sings Jim Croce. Staying fairly close to the original inceptions of Croce’s compositions, Reed pays well-deserving respect to one of the best pop songwriters of the 1970’s (or otherwise). Reed’s twang and grit offer only a tinge of dirt-riddled flair to Croce’s already rough-around-the-edges approach, but all-in-all, Reed Sings Croce is a delightfully pleasant spin, and should be heard by any fan of either prestigious artist. From The Avalanches to Jerry Reed… that’s how we do it here at The Groove.

It’s a Greatest Hits kind of day over here at The Groove. The 8-track player is fired up and ready to churn some of the best technology 1974 had to offer. Janis, Jim, and Waylon are on display to offer up their Greatest Hits in pure, 8-track glory. The 8-track collection is rapidly growing… more to come on that in the coming days.

Jim Croce, triple IPA, and a little lamp with a flickering fireplace for a base. To the simple things, kids!

Feeling a bit letdown today after having been outbid on Rocket from the Crypt’s coveted Rocket Pack… for the second time this year, so am clinging to the comforting grooves of Mr. Croce. This 1975 double LP collection from 1975 was nabbed for $4 in Vegas, and is littered with skips and major imperfections… much like my seemingly endless journey towards the Rocket Pack. Keep hunting if you can stomach the heartache, kids.

The below list is, we feel, adequate camping music for the inner, nature-minded ruffian in all of us. A few old standbys, a few personal favs, but all helping to create a calming soundtrack for our recent, peacock-screaming nature excursion. I’d be interested to hear what others would consider like-minded, camping-acceptable albums.

Jim Croce – I Got A Name

John Fahey – The Dance of Death & Other Plantation Favorites Volume 3

The Beatles – The Kinfaun Demos 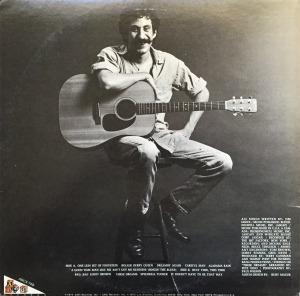 There are certain milestones, chapters in a man’s life (obvious statement), and these chapters can be traced to the discovery and overabundant submersion into specific pop artists… for me, anyway. Phases may be a better term for it. When I was young I went through my Bon Jovi phase (ended), followed by my Def Leppard phase (ended). In Junior High it was the hip-hop (mainly ended) and Jane’s Addiction phases (on-going), before graduating to the punk, industrial, and metal phases (never-ending, never-ending, and mainly ended, respectfully). I’ll spare you the long line of personal music phases (as well as their lengths), and cut directly to the now, decade-long Jim Croce phase. First discovered from classic rock radio as a lad, my Croce chapter started with a 2-disc compilation titled, The 50th Anniversary Collection. Acquired during my brief tenure as a music coordinator, the digital version of this album opened a new and exciting door to some of the most profound, and emotional songwriting I’d ever hear. While some chapters conclude, I pray my Croce chapter has no ending.

Not that any of this matters, because at the end of the day, it all comes down to the music, and beneath both covers is a substantial collection of riveting folk-rock full of country themes, hard time, and beautiful lyrics. Ingrid gets as much, if not more mic time than Jim, (and she kills it), but that’s not to say James Joseph Croce ever takes a backseat, or really, that he ever could. From Vespers to Big Wheel to the emotionally cleansing closer, Spin, Spin, Spin, Another Day, Another Town is a monumental collection for anyone looking to tap square into late 60’s Americana, and with anything Croce related, she comes HIGHLY recommended. 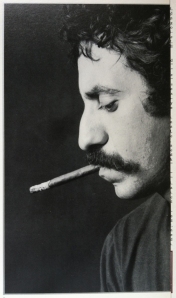 41 years ago today, a dark wave of grief eclipsed the mournful sun as across the airwaves read… Jim Croce is dead. So long the Leroy Browns and the Roller Derby Queens. So long the big executives and the car washers; the pool hustlers and the moonshine runners. All these majestic characters would be, forever, laid to rest, on the 20th of September, 1973.

It’s not often that I fire up the 8-track player quietly sitting under our big screen. The same hi-fi, wood-paneled unit solemnly connected to our living room speakers… and this is a shame for several reasons. The warm, comforting cloud of ecstatic ear food that emits from our otherwise digital spewing speakers is something that cannot be replicated (unless said scowl is shouting from our dining room hi-fi). The issue, above all others, concerning bygone audio formats, is the rapid lack of obtainable cassettes. I recently became aware that The Clash’s London Calling was released on 8-track (with some songs omitted, of course), but that fetches a hefty sum, and I already own this particular album in a few other formats (cassette, digital, LP), so the immediate “need” for such an album somewhat falls into collecting obscurity.

I love every conceivable music-replicating format, and the 8-track is certainly no exception. I just wish there were more punk-like album released… perhaps THEN would I open the expanding door to this already optional format. Instead, I’ll cycle through the disco chart toppers, the Croce hits, and the Star Wars soundtrack, until I stumble across the Mecca of 8-track gold. The burgeoning beginnings of yet another format collection may in fact be eclipsing the horizon… God help us all.

So as to dismiss my feelings of guilt and laziness, and to sustain any modicum of respectability I probably no longer possess, today’s suggested listen comes from Jim & Ingrid Croce. Spin, Spin, Spin is a depressingly sweet number featuring the short lived husband and wife duo lamenting the painful distraction of drugs, and the underlying consequences that inevitably tag along. Especially heartbreaking is hearing Mr. Croce sing:

But where are you spinnin’

When will you know

That life is for livin’

That it isn’t a show

Dead at age 30, Mr. Croce left so much astounding work unfinished. This haunting song lives as a fruitful example of how timeless this artist’s songwriting ability has become, and cries for the deserving respect that fuels the thoughts of wonderful things that may have been. RIP Mr. Croce.

Note to self… do NOT spend the morning drinking mimosas and yelling at the television for your 4th string quarterback to complete a pass longer than 6 yards if you’ve got 3+ hours of audio editing to produce. In this week’s coupon-cutting installment, we enjoy the talents of Butter 08, James Booker, Thomas Bangalter, Minutemen, Laibach, Jim & Ingrid Croce, Holy F*ck and Rocket from the Crypt. It’s late, and I’m tired, but here it is… another example of how willing I am to waste my precious time. Enjoy! 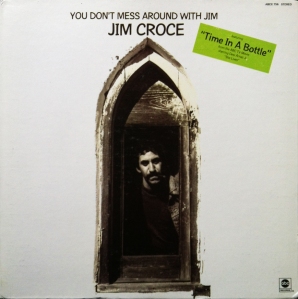 As far as solo songwriters go, there are three that loom atop all others. Presented in no particular order, because honestly, how could you logically rank these three? First is Van Morrison, who is probably the most obvious of the three. Second is Paul Simon, who is perhaps the most critically acclaimed of the bunch due to his hugely successful duo before branching out and going solo, and last but certainly not least, is Jim Croce.

Croce kind of flies under the radar when grouped with the great Morrison and Simon. His gentle, free-spirited storytelling, his whimsical acoustic guitar work, his clever, heartfelt and often hilarious lyrics, and the fact that he accomplished his timeless arsenal of music by the time of his untimely death at the age of 30 sets him apart from the aforementioned pair. The fact that the bulk of his success happened, unfortunately, after he passed, doesn’t take away from the emotional weight of his music.

You Don’t Mess Around with Jim was Croce’s third and most successful album, spending 93 weeks on the charts. Due to the extraordinary single, Time in a Bottle, which peaked a year after his unfortunate plane crash, You Don’t Mess Around with Jim was the best selling album for five weeks in 1974. It’s sad ol’ Jim wasn’t around to see how many people admired his great work.