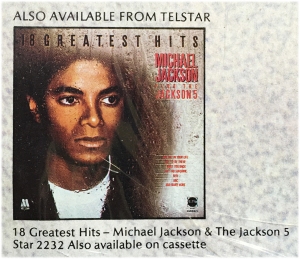 It’s not very often, in fact, this is the first time it’s happened, that one reaches for a Marvin Gaye album, and runs across a back cover ad for a random-ass Michael Jackson comp record. Titled 18 Greatest Hits, this 1983 release featuring 18 mega hits from Michael Jackson & The Jackson 5 can be had for a cool $0.71 on LP, and an acceptable $4.22 on cassette (courtesy of Discogs.com). I was all set and ready to dig into the untimely death of Marvin Gaye when I stumbled across this little 23-year-old gem. Rediscovering my collection by means of this medium has proven to be a hilarious and boisterous experience. I think I’m finally starting to dig it. Also available on cassette.