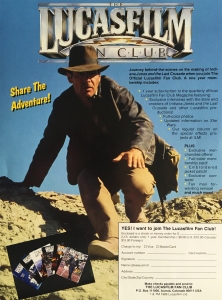 It’s a Dog, It’s a Cat, It’s a Fan Club! Either it wasn’t important enough at the time to file away into the manila folders of my memory, or I’d just discovered an amazing insert inside the soundtrack to my Indiana Jones and the Last Crusade LP! This was mentioned here before, but when we play Fireball Island (only the best board game in the history of board games), we listen Indiana Jones soundtracks. This past Sunday, we were on our tiebreaker game, our third, and that’s when this little gem, now 27 years old, was discovered. The Lucasfilm Fan Club Magazine, as you well know, became the Star Wars Insider magazine with issue #23, and has, in its tenure, and as of June 14th, seen its 166th issue. Share the adventure!