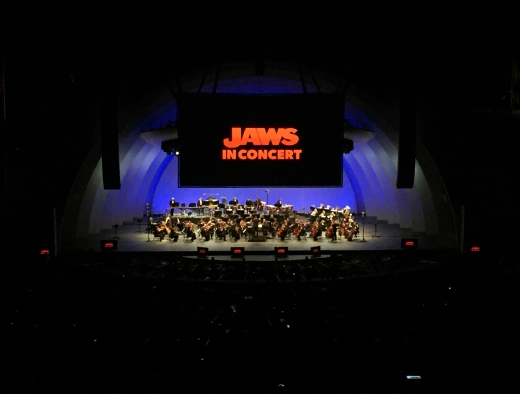 Hats off to David Newman and the entire Hollywood Bowl Orchestra for an unforgettable and Jawsome performance at the Hollywood Bowl last night. Witnessing a live orchestra play this quintessential score (which also happens to be Academy Award-winning, mind you) in accompaniment to the film, with 17,000+ of my Angelino neighbors, was definitely an experience I’ll never forget. Hollywood Bowl people of power, PLEASE DO THIS EVERY YEAR!

Leave it to Mondo. Am I right?! At the end of May they reissued the 2 LP soundtrack to John Williams’ Jurassic Park. This 180g yellow and red swirl with black splatter color variant showed up on their site for about a day, and is now no longer available. Preowned copies are up on Discogs for $79 to $199.99, so I’m glad I ignored my hesitation and nabbed this gem when I did. Nobody beats John Williams. Nobody. 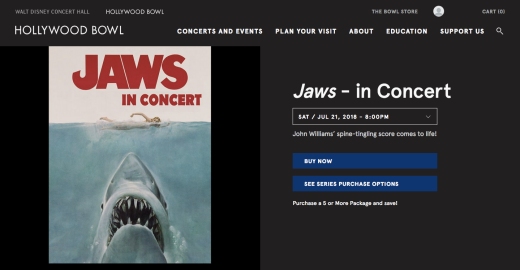 For those in the know, Jaws is a bit of a big deal for us. What can I say? I married into it, so to speak. Anyway, the Hollywood Bowl is hosting a two-night orchestra and film pairing in late July. No, unfortunately it’s not John Williams conducting (it’s David Newman), but this opportunity is certainly not one to be missed. My wife (and working Editor of The Groove) has never been to The Bowl, and as Jaws is her favorite movie (she’s a keeper, am I right?!), this Hollywood Bowl Orchestra accompanying the original Summer Blockbuster duo was a no-brainer. Tix are still avail, so if you’re in the area, do yourself a solid. 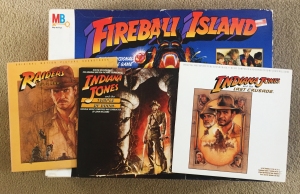 The best damn (unintentional) soundtrack(s) to the best damn (dimensional) board game of all time. Indiana Jones, via means of the legendary John Williams, and the Milton Bradley classic, Fireball Island, are the perfect marriage for lazy, beer-swiggling weekends. There will never be a better board game / soundtrack pairing. You. Have. My. Word.

For those of you unsavory types who missed out on the ocean blue double vinyl version of the Mondo Jaws soundtrack, you’ve got an overpriced chance to acquire a copy over at srcvinyl. That’s right! For a cool $54.99, you could be the proud owner of the black vinyl version, for roughly a third more than the original retail cost of the ocean blue version. Upon closer examination over at src, it appears this item’s preorder description offers conflicting information… Unless there are varying degrees of darkness (“none more black”), how could a 180 gram black colored vinyl record be described as “Limited double 180gm colored vinyl LP pressing” ??? Somebody better fix that shit! 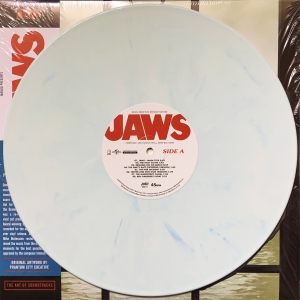 The long-awaited double LP soundtrack to (arguably) the greatest film of all time, Jaws, arrived just in time for some much-needed holiday cheer. Presented for the first time on wax, this “double vinyl set presents the entire Academy Award-winning score as composed and recorded for the actual film” (the Grammy-winning 1975 MCA Records release was simply a re-recording, mind you). Offered on majestic, ocean blue vinyl, and released by the greatest soundtrack distributors known to man, Mondo, this jaw(s)-dropping release ranks up there as one of the most anticipated of the year… especially since preorders went live back in early July, on Jaws’ Day, actually (7/3). Save up your holiday gift money if you’ve missed out, because this one is bar none, the definition of essential.

Happy Jaws Day, everyone! Enjoy your tequila and the company of good friends and family, and don’t go anywhere near the water! Oh! And head over to Mondo RIGHT NOW and preorder the Academy Award winning soundtrack on double “ocean blue” vinyl. This is Mondo, so they’ll go quickly. Tell ’em The Groove sent ‘ya! (Thanks to Hardwick for the heads up on this release.)

It’s a Dog, It’s a Cat, It’s a Fan Club! Either it wasn’t important enough at the time to file away into the manila folders of my memory, or I’d just discovered an amazing insert inside the soundtrack to my Indiana Jones and the Last Crusade LP! This was mentioned here before, but when we play Fireball Island (only the best board game in the history of board games), we listen Indiana Jones soundtracks. This past Sunday, we were on our tiebreaker game, our third, and that’s when this little gem, now 27 years old, was discovered. The Lucasfilm Fan Club Magazine, as you well know, became the Star Wars Insider magazine with issue #23, and has, in its tenure, and as of June 14th, seen its 166th issue. Share the adventure!
July 3, 2016 1975 Jaws, John Williams, music, record collecting, records, vinyl Leave a comment 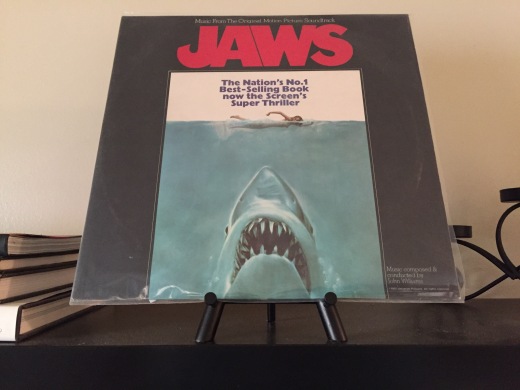 Don’t go NEAR the water.

Like something straight out of the opening credits to North by Northwest, this, the original cover to Henry Mancini’s 1959 The Music From “Peter Gunn” aptly packages the swiftly-infused late 50’s power jazz within. Spy Hunter has nothing on Peter Gunn, clearly, and this original sleeve runs high-speed laps around its reissue, which was (im)perfectly showcased here. Word on the street (via Internet Ave) is that John Williams was part of Henry Mancini’s orchestra during this time, so hit your local brick and mortar first thing tomorrow and track this down this jazzy jamboree.

A new addition to this year’s Jaws Day celebration, this bass-heavy, rhythmically comforting 8-track served as both a conversation starter, and an outstanding source for interlude ambience. Bruce at his finest, thanks to John Williams. 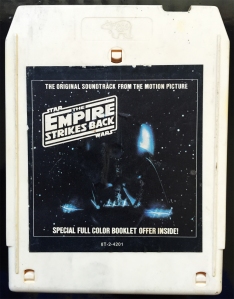 I set out to acquire the Jaws soundtrack on 8-Track for the upcoming annual Jaws Day (July 3rd, don’t forget), and I ended up with a dirt cheap, fully functioning set of the following, all on glorious 8-Track: Jaws (Music from the Original Motion Picture Soundtrack), Star Wars (The Original Soundtrack from the 20th Century-Fox Film), and this copy of Star Wars – The Empire Strikes Back. All in (just about) perfect working condition. I never thought I’d enjoy the romantic static and bass-heavy warmth of 8-Track sound as much as I do… makes me glad I keep the player in the living room. My SO on the other hand…

What is your favorite Indiana Jones film? Mine is Temple… for the lot of those I mingle with, it’s Raiders. Fools, as far as I’m concerned.

Is the “Extra” in Extra Terrestrial similar to the “Extra” in Extra Strength Tylenol? Like, there is there a Regular Terrestrial (R.T.), or even a Maximum Terrestrial (M.T.)? Anyway, 1982’s blockbuster cultivated a whopping $792,910,554 in worldwide box office sales during its tenure in theaters, which calculates to $1,940,116,550.26 with inflation (source: http://www.usinflationcalculator.com/). But don’t worry your pretty little sky-searching head, because this epic film’s original motion picture soundtrack can be had at a fraction of a fraction of a fraction (of a fraction) of the price. $2.73 over at Discogs, and this essential otherworldly soundtrack can be yours.

What thrilling day it must have been back in 1977 at 51 N. 425 E. in Smithfield, Utah (zip 84335). Probably having just returned home from the local K-Mart with his newly acquired Star Wars original motion picture soundtrack, a young (probably high school-aged) Mark couldn’t wait to relive the intergalactic adventures on his parents’ home stereo system while leafing through all the bonus goodies that accompany this amazing two LP set. Aside from the legendary masterworks of John Williams, 20th Century Records’ release also included an epic poster, a credits insert, and this mail in offer for an official Star Wars t-shirt. Mark is a size large, by the way.

The specifics surrounding the immediate and gleeful filling out of this order form that prevented a space drama-loving Mark Eskelson to NOT send it in will forever be pondered and (over) analyzed by its current owner (me). If only for a brief moment, it must be stated that Mark’s true reason for not forking over $5 for this gem of necessary fashion can only truly be understood by him, in a galaxy far, far away.

Distributed in the height of Star Wars sequel anticipation, this 1979 release of a children’s Read-Along book and record set hosts one of my first vivid memories of playing a record. Thanks to my first, pocket-sized (for very large pockets) turntable, I was able to enjoy an insanely abridged version of my favorite story… a story I had been convinced was the greatest ever told.

When listening to this little memory-harboring 7″ (with all its pop-filled, skip-tastic glory), I can still picture myself reenacting the drama-soaked adventures with my 3¾” Star Wars action figures and thinking, being a kid is the greatest thing on this, or any galaxy, regardless of placement in time and/or location. (A long time ago in a galaxy far, far away… was easily replaced with Just a moment ago in a playroom very, very near…)

The ol’ girl has certainly seen better days, but I wouldn’t trade her for all seats on the Imperial Senate. 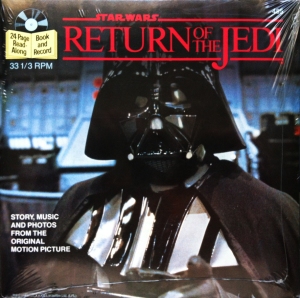 This is the story, of Return of the Jedi. You can read along with me in your book. You will know it is time to turn the page when you hear Artoo-Detoo beep like this, “Boop, beep-beep, boop. BOO-BEW!”

Throughout the early 80s, Star Wars, with its vast world filled with luscious characters, could be found fighting for galactic power in your cereal bowl, your pencil kit, on the laces your shoes, on your back helping to carry your books, on your waist to help keep your pants up, packaged with bubble gum as little cardboard trading cards, and as a beaming Prudent Groove would like to acknowledge, a 24 page read-along with 33 1/3rpm record containing the story, music and photos from the original motion picture, Return of the Jedi. Me as a 4-year-old, “You mean, I can LISTEN to the story and FOLLOW ALONG with my very own book?!” Mind = blown.

Star Wars was such a massive part of my generation’s childhood that, for me, it’s difficult to see the printed year 1983 and NOT think Return of the Jedi. And thanks to this little read-along-reminder-guy, I can relive the great tale of (spoiler alert!) the Rebel Alliance defeating the Galactic Empire in grand, book-turning fashion.

The narrator does a good job of keeping the story going with his smooth, yet demonstrative voice. Sound effects are lifted directly from the film, as is the classic John Williams’ score. The movie stills were great to analyze as a kid (this was back when it was difficult to pause a VHS tape at the exact moment you wanted), but the REAL fun of this little 7” lies in the voice actors hired to portray the story’s main characters: Luke, Han & Leia. It became apparent early on in this read-along that the Luke Skywalker standing up to Jabba the Hut (original voice), was NOT the Luke you knew and loved. This was immediately jarring, but, like a child’s mind works, was quickly forgotten when Artoo-Detoo prompted: 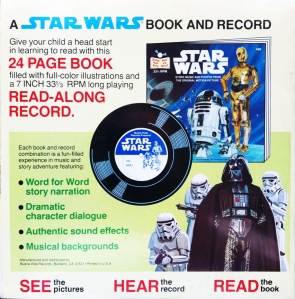 I’m ecstatic that I kept this little gem from my wonder years, but then again I keep EVERYTHING (much to the dismay of my GF and my parents). This book and record set is worth seeking out if only to chuckle at the stand-in voice acting cast.

Leia hugged him. “Come join us, my brave Jedi.” She led him back to their circle of friends – heroes together to the end.