Hats off to David Newman and the entire Hollywood Bowl Orchestra for an unforgettable and Jawsome performance at the Hollywood Bowl last night. Witnessing a live orchestra play this quintessential score (which also happens to be Academy Award-winning, mind you) in accompaniment to the film, with 17,000+ of my Angelino neighbors, was definitely an experience I’ll never forget. Hollywood Bowl people of power, PLEASE DO THIS EVERY YEAR!

Though they’re currently banned from playing any major venue in the United States, NOFX was (and still pretty much is) a big event, especially at the (now defunct) Hollywood House of Blues. Can’t remember which date I attended, but I had to go solo for this one (2007). Bonus points for the inclusion of Pennywise on the same flyer.

Front 242… a (long-lived) obsession back in my late 20’s. This particular show at the Avalon in Hollywood featured a sick visual accompaniment to this legendary Belgium band’s aggressive EBM soundtrack. I actually spoke with the videographer after the show and expressed my esteemed gratitude for his / their work. This, the Catch the Men tour would be to promote the band’s last studio album. They’ve since released several other live albums, but this show was definitely one for the ages. I’ve been meaning to see them ever since… 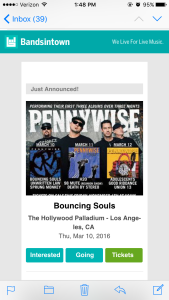 This one was a bit of a challenge to figure out, but after some nervous and speedy research, The Bouncing Souls, and not Pennywise will be performing at the Palladium on March 10. Ticket purchased, and early work exit email draft started. Bring on these East Coast fools!

Lagwagon comes to Hollywood on Friday the 13th, and we’ve got tickets. What’s more, they’re playing, in its entirety, and in my humble opinion, their best album, 1994’s Trashed. Also, my computer is dying. 8 years. An era gone by… it’s time to trash it. 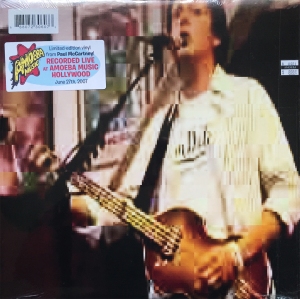 Back in 2007, Hear Music, co-owned label by Starbucks and the Concord Music Group, released four tracks by Sir Paul McCartney performing live at Amoeba Hollywood. I was working in Hollywood at the time and called to see what the situation was… are there tickets, how long is the expected line, stuff like that. I was told by the kind gentleman on the phone that there were already people waiting in line for the event, that wasn’t set to take place for another 28 hours, clearly the next day. I laughed and said my thank yous. A few months later I picked up this copy of Amoeba’s Secret, but for reasons I still can’t recall, never opened it. She may have her virgin spin sometime this weekend, but then again I may wait another 8 years. We’ll see.. Happy Friday!

I’m off to see the Wagon tonight. I’ve listened to these guys for nearly 18 years… I was only 16 when I’d first heard them, and until tonight, I’d never seen them. Let’s say I’m a little excited… have a good weekend, kids!

If you don’t listen to Bob Seger, with his horn-blowing, rhythm curating Silver Bullet Band, you should. Nine Tonight, a live compilation album comprised of two live performances from 80 & 81, flawlessly captures the hopped-up energy and non-assuming down-home shtick of this legend in the height of his celebrated, classic rock pilgrimage. Straightforward, certainly does not equal mundane.

There is a certain circle of classic rock bands (which, when analyzed, highlights specific albums) that embody the bulk of my early, classic-rock-stratosphere-puncturing inauguration into a wealth of audible pleasure that reached passed the (familiar) heavy wave of Bon Jovi and Def Leppard. I have my father to thank for this, and not a Bob Seger reference goes by that doesn’t remind me of riding in my father’s pickup, and listening to, among a slew of other classic rock essentials, Nine Tonight.

… that kind of music just soothes the soul…

From the Six Fat Dutchmen, to Billy Vaughn, to the Lennon Sisters, to Pat Boone singing Hymns We Love, Dot Records is home to almost 600 albums, whose complete, full-color catalogue can be had for a measly double nickel. Unlock the door to the (piercing) enchanted sounds of Eddie Peabody on Man With the Banjo, or roll along with the Spaghetti Rag playin’ Jo Ann Castle on Ragtime Piano Gal, or better yet, exercise your inner desire for mid-50s variety shows with Calcutta! by Lawrence Welk. Yes, all the albums you could ever hope to want are here on Dot Records, so don’t delay! Cut and fill out the attached coupon, flip that puppy into an envelope and mail it to:

A lifetime worth of (regrettable) unforgettable musical euphoria awaits you! 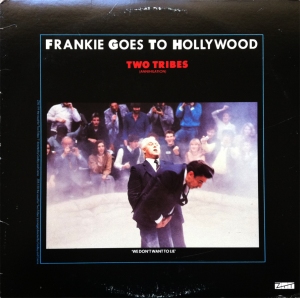 Is that a Ronald Reagan look-alike grabbing his nether regions in apocalyptic agony? Why, yes, it is. Following the international success of their first single, Relax, Frankie Goes to Hollywood released the anti-war, half tongue-in-cheek, half a bit-too-close-to-home, funk-friendly dance anthem, Two Tribes.

Accompanied by an outrageous video, Two Tribes broke a whole bunch of UK chart records that, at the time, I was completely oblivious to. To be fair, in 1984 my daily routine consisted of dropping my Bespin Han Solo action figure from a covered bridge in a suicidal leap just in time for my electric train to speed by and run him over. Han survived, and was able to go on fighting the good fight (that was, until Joe & Cobra infiltrated my childhood just a few short years later). 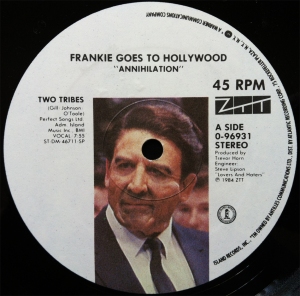 Focusing on the hyper-exaggerated (he said jokingly) possibility of global nuclear war, Frankie & crew regurgitated a positive product from an extremely negative scenario. If you ask me, and you didn’t, Two Tribes withstood the test of time, and should serve as a welcome accompaniment to any record collection, regardless of which side of the fence your political beliefs may fall.

I didn’t exactly pay $1.57 for Bent Fabric’s debut album, Alley Cat, but a record released in 1962 (adjusted for inflation, of course) calculated at $11.76, priced at $2.99 just yesterday, was something I certainly couldn’t turn down.

Bent Fabricius-Bjerre, AKA Bent Fabric, is an 88-year-old Danish pianist/composer who, on this album, plays merry ol’ ragtime music with the cunning grace of someone like Sergei Rachmaninov… only, you know, with cats.

A few days ago I mentioned the four Bent Fabric albums on my want list. Yesterday, I was fortunate enough to chalk one off the list. Thank you, Amoeba Hollywood.

Setting the musical content aside, as I assume few of you frequent the sheepish delights of early 80’s hardcore, Mystic Sampler #1, has a very distinct, unique, creative, humorous and memorable feature that NO OTHER record in my collection possess. It is a feature so ingenious, it can be easily misinterpreted as a pressing error. Had it not appeared at the exact spot on both sides of the album, I would have written it off as such, and this post would never have existed. It is a feature I’m dubbing, “The Intentional Skip.”

Punk Rock is more about emotion than it is about music. Whether you believe that or not is irrelevant, and beside the point. Allow me to explain this with a scenario. Imagine getting a used record… for me it was Mystic Sampler #1. Now, imagine putting your newly purchased record onto your trusty, freedom-yielding phonograph. The record starts… plays… you’re happy. Cut to the last revolution of the last track on Side 1. Familiar with the song or not, you can’t help but notice the record skip… and skip… and skip. You think, “Great! No wonder it was so cheap!” But as you start towards your music machine, you begin to think, and slow your determined approach. You listen, as the record repeats… looping the same words over, and over, and over… “Have a nice day. Have a nice day. Have a nice day…” As you stand, with a dumbfounded look on your face, you begin to cock your head, not unlike a dog when it thinks it understands what you’re saying. You begin to wonder… “WAS THIS SKIP INTENTIONAL?!”

Suddenly, there is a warm and fuzzy part of you that perks up, and for a brief moment of spontaneous realization, you find harmony with the world… that is, until a moment later when your head begins to ache from the incessant looping of an angry adolescent with their opinionated, political overtones bouncing back and forth inside your head-space until you physically ACT, and raise the tone arm in the attempts to cease the infernal rage. Punk Rock requires action, if only the motor skills with which to turn it off.

The affection I have towards my addiction (of collecting records) is not unlike a relationship. A relationship filled with ecstasy and hopeless bleak despair.  Looking back at my nearly 20-year relationship (fugg I’m old!), certain milestones come to mind that mark my progression/devolution. Like for instance, my first record store.

One never forgets their first time.

It was, and is still called Mad City Music Exchange and was, and is still located on Willy St. (Williamson St.) a few blocks from the State Capitol in Madison, WI. It was here where I began to build my (nearing completion) Beastie Boys discography, where I obtained my Big Rig 7” (Jesse from Op Ivy’s band after Op Ivy), and whose owner agreed to be interviewed by a High School Senior version of me for a fictitious record store I was to own and operate for a Marketing project. I’ll never forget his response after I gleefully informed him that I too wanted to own and operate an independent record store. His reply, “Why would you want to do a thing like that?”

As with many relationships, things just don’t work out. There is the whole “growing apart” thing, the “I dig your store but not your prices, so, you know, let’s just be friends” thing, and the “common necessity for relocation” thing. (THAT’S IT! THOSE ARE THE ONLY THINGS THAT DOOM A RELATIONSHIP! I kid.) So when opportunity (and my parents) moved me to Milwaukee, I was in desperate need of finding a new lover; a pusher for my audio starved addiction.

Atomic Records was then, what Hollywood’s legendary Amoeba Music is now. If you’ve been to Amoeba in Hollywood, you get an idea of what I’m talking (writing) about. Atomic was my one-stop-shop for just about everything! Sleeves, Rocket from the Crypt stickers, tickets to BS 2000 shows, rare UK Zines, Christmas gifts for my father (who also collects records), my Har Mar Superstar picture disc, t-shirts, and sometimes live acoustic shows by nearby Chicago bands.

I’d stop in at Atomic 3-4 times a week while attending UW Milwaukee. There was something romantic about that shop in the dark winter months. With warm, inviting lights and the childlike anticipation of finding a coveted gem, Atomic almost acted like a temporary dose of sanity while helping me to forget about the death that is winter in Wisconsin. It was a safe haven, if only at 30-minute increments.

After leaving Milwaukee and moving to the much more mentally sustainable environment of Southern California, I found other record shop relationships and all but forgot about my brief, but prodigious admiration towards Atomic Records.

She’s gone now; closed her doors in 2009, and with it a chapter of my life that is just as important as the current chapter I’m attempting to write with The Prudent Groove.

Atomic may not have been my first, but she was arguably the best and, one I will certainly never forget.