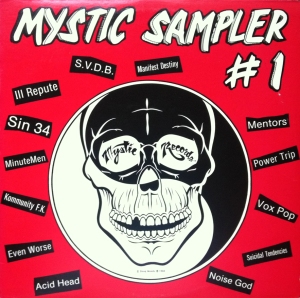 Setting the musical content aside, as I assume few of you frequent the sheepish delights of early 80’s hardcore, Mystic Sampler #1, has a very distinct, unique, creative, humorous and memorable feature that NO OTHER record in my collection possess. It is a feature so ingenious, it can be easily misinterpreted as a pressing error. Had it not appeared at the exact spot on both sides of the album, I would have written it off as such, and this post would never have existed. It is a feature I’m dubbing, “The Intentional Skip.”

Punk Rock is more about emotion than it is about music. Whether you believe that or not is irrelevant, and beside the point. Allow me to explain this with a scenario. Imagine getting a used record… for me it was Mystic Sampler #1. Now, imagine putting your newly purchased record onto your trusty, freedom-yielding phonograph. The record starts… plays… you’re happy. Cut to the last revolution of the last track on Side 1. Familiar with the song or not, you can’t help but notice the record skip… and skip… and skip. You think, “Great! No wonder it was so cheap!” But as you start towards your music machine, you begin to think, and slow your determined approach. You listen, as the record repeats… looping the same words over, and over, and over… “Have a nice day. Have a nice day. Have a nice day…” As you stand, with a dumbfounded look on your face, you begin to cock your head, not unlike a dog when it thinks it understands what you’re saying. You begin to wonder… “WAS THIS SKIP INTENTIONAL?!”

Suddenly, there is a warm and fuzzy part of you that perks up, and for a brief moment of spontaneous realization, you find harmony with the world… that is, until a moment later when your head begins to ache from the incessant looping of an angry adolescent with their opinionated, political overtones bouncing back and forth inside your head-space until you physically ACT, and raise the tone arm in the attempts to cease the infernal rage. Punk Rock requires action, if only the motor skills with which to turn it off.