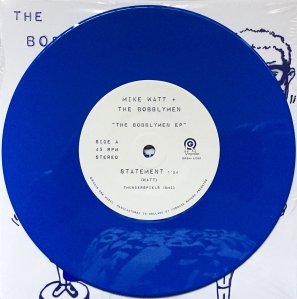 Just one of the great Record Store Day Black Friday releases acquired this morning in Los Angeles, Mike Watt + The Bobblymen’s The Bobblymen EP. If three unreleased tracks from over three decades ago originally intended for The Minutemen isn’t enough to persuade you, have a read at what Mr. Watt himself has to say about this historic 7″:

“Here’s three tunes I wrote for The Minutemen thirty-five years ago that never got released (hell, one never ever got play live and the other two only a tiny bit), I recorded them very recently w/guys I regularly play w/but never together in this configuration which was Bob Lee’s idea and hence the name of the proj” – Mike  Watt