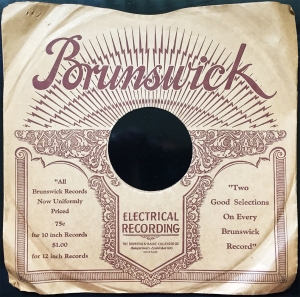 Brunswick Records, the now 103-year-old label, initially began releasing US-recorded material solely in Canada (eh?). Growing in size to become one of the world’s “big three” (Victor, Columbia Records, being the other two), Brunswick would find domestic success releasing “urban” or “race records” including those by The Jungle Band (Duke Ellington) and Fletcher Henderson. Take notice of the striking (pun completely intended) lightning bolt design behind the name, and although she may now be more commonly known for her bold bowling balls, the Brunswick name has been a household staple since September of 1845.