Owning a hard copy of an album more than twice is usually an indication of some pretty stellar grooves, but my (excuse) rationale behind owning three copies of Pennywise’s 1995 effort, About Time, is purely for nostalgic purposes. Dubbed to tape more than a few times, About Time was one of the 8 or so cassettes sliding around the pickup (a 1989 Ford Ranger) for much of my Junior year of high school. I distinctly remember driving to and from work, and to the occasional bonfire, blasting Perfect People while hollering along to the lyrics (usually at full roar, and much to the dismay of my frequent, punk-deaf passengers).

Southern California pop-punk at its finest, About Time recently (as of a few months ago, I believe) saw a limited run (500 copies) on smoke colored vinyl. Seeing frisky releases such as this that incorporate the album cover into the vinyl color get me excited for upcoming reissues that will undoubtedly acquire my money (the smoke colored record ties in nicely to the timebomb on the cover, don’t you think?). For nostalgia’s sake, owning an album more than twice makes perfect sense to me. 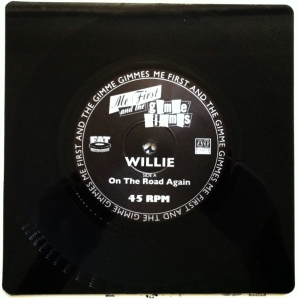 Records ARE square, man! As well as being insanely difficult to photograph (unless of course you WANT the stupid reflection of that “deer in the headlights” expression haunting your photo for the rest of eternity), they’re completely inconvenient! Say you’re in a dead run from a meathead and his meathead girl because you accidentally mistook his 1989 Ford Ranger for yours and were perplexed when your key didn’t open the door. Now say you look behind you and Mr. Meathead is gaining ground. Well, if you had your iPod or other digital music device, you could pop in your ear buds, scroll to your favorite “get me the hell out of here” track and voilà! You’d instantly become a cheetah, and Mr. Meathead would be left wondering why he stupidly began chasing you in the first place. Now, imagine the exact same scenario, but instead of an iPod, you were carrying your record player. Can you picture it? HOW RIDICULOUS DO YOU LOOK RUNNING DOWN THE STREET CARRYING A BULKY TURNTABLE?!

Wait… you mean the SHAPE square, and not the slang word for unhip? (Scratches head) Gotcha. Well, then this post was a complete waste of your time. My apologies. Carry on.