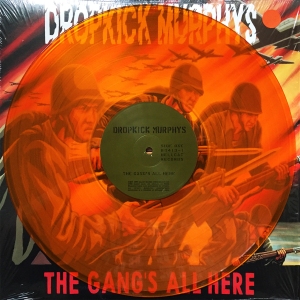 Once owned on compact disc (ripped if I remember correctly), I was rather pleased when Epitaph Records released a transparent orange vinyl version of the Dropkick Murphy’s second album (and in my option BEST), The Gang’s All Here. 500 copies of this color were released in 2010, some 11 years after the original release, and upon quick digging, there appears to be a red vinyl version limited to 600 pressings. Though they fall under the pop-punk umbrella, the Dropkick Murphy’s were a refreshing, big-band take at the pop-punk soundscape during the late 1990’s, and The Gang’s All Here stuck out like a much-needed and bloody sore thumb. More nostalgia than casual spinning these days, this record still sparks joy. (Yes, we’ve been Marie’d…) 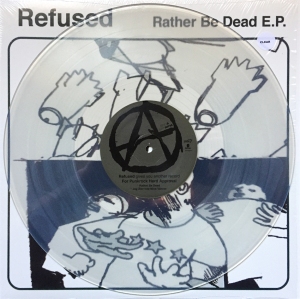 Previously only released on compact disc in Sweden (back in 1996), Refused’s Rather Be Dead E.P. received its first US release via Epitaph Records on nifty crystal clear vinyl (photo featured here… obviously). As a companion to the band’s sophomore offering, Songs to Fan the Flames of Discontent, this E.P. (or is it EP?) offers a wider range of hardcore not featured on the studio LP (save for the title track), and is a must for any Refused junkie (like myself). 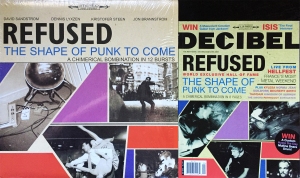 Though not until October, it’s notable to mention that Refused’s undisputed masterpiece, The Shape of Punk to Come, turns 20 this year. Sit on that one for a beat. While you’re at it, check out Decibel’s coverage of the album in their September, 2010 issue (No. 071). If this doesn’t make you feel old, you’re probably already in the ground. 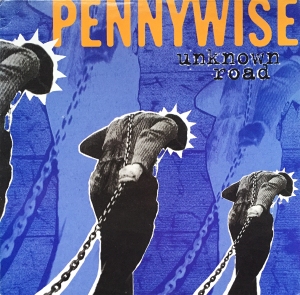 Unknown Road is / was Pennywise’s second studio album. These punk brats released ‘er way back in 1993 and she was one of my first ventures into the genre. More importantly, though, its opening track, Unknown Road, was the intro song to our Junior Varsity basketball warmup mix tape. The things you remember, eh? 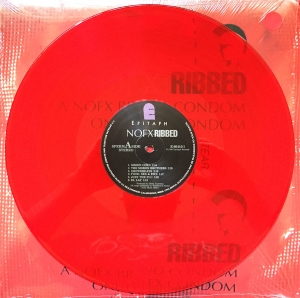 1991’s Ribbed by (then) Los Angeles clowns NOFX received the red vinyl reissue treatment back in 2010. Crazy to think that was 7 years ago, already. Every few years Epitaph Records reissues small color variant batches of its classic albums, so it was only a matter of time before we saw another Ribbed variant. Also released in 2010 is a blue vinyl version, and the crème de la crème dropped in 2014 (clear vinyl). Still on the lookout for that one. 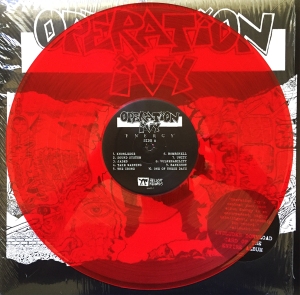 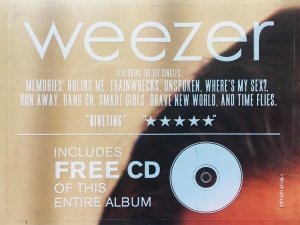 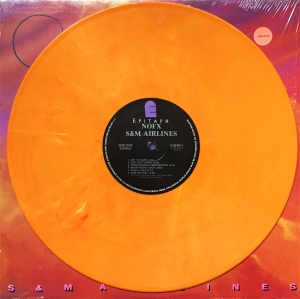 Let’s roll out of 2016 in blazing style, aboard S&M Airlines. I won’t get into the plethora of ways 2016 was one of the worst years of my existence, I’ll only hold one, desperate match in the attempts at keeping the flame of hope alive. 2016, you are dead, and I couldn’t be happier. 2017, I look at you with hesitant optimism. Don’t let us down. Happy New Year, kids. 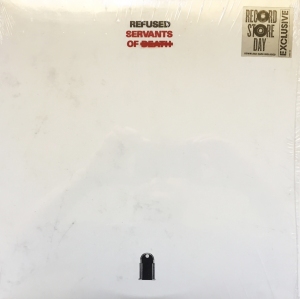 It’s always a good day when a new Refused record is released. Servants of Death was, in fact, the first record I grabbed last Friday (RSD Black Friday). The only record from that day’s haul that came with a download card (thank you Epitaph), this six track EP contains the “single” Servants of Death from last year’s Freedom release, as well as a new, never before released-on-vinyl track Stolen Voices, as well as four live tracks from the band’s 2015 tour. Overall a fantastic little accompaniment to an already stellar discography. 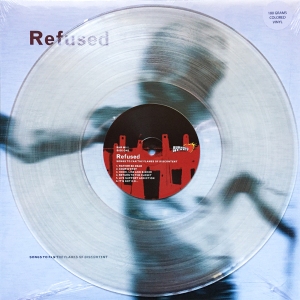 As clear as an unmuddied lake, this 2016 reissue (from The Netherlands region) recently popped up in the US Epitaph online store, and was swiftly nabbed by staff here at The Prudent Groove. We now own Songs to Fan the Flames of Discontent a total of five times, and the way Epitaph is kicking out short runs of color variants, that number is likely to increase very soon. Although not as prolific as their opus, 1998’s The Shape of Punk to Come, this 1996 precursor couples perfectly to create the uncompromising, one-two, hardcore punk-punch. Epitaph still has copies at the posting of this blurb, so jump on in. 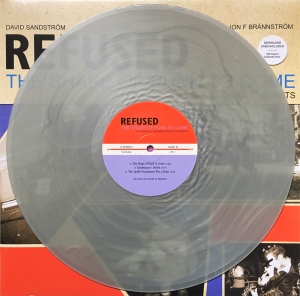 Another day, another The Shape of Punk to Come variant… and I’m on board. Happy listening, kids. 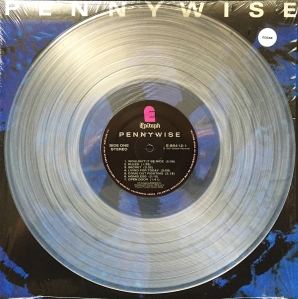 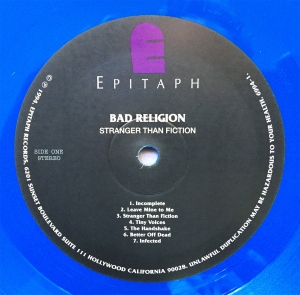 …Unlawful duplication may be hazardous to your health. 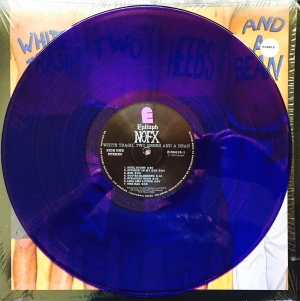 NOFX’s fourth chronological album was actually the third album in the autobiographical sense. Not that this matters in any capacity, but upon discovering White Trash, Two Heebs and a Bean, I’d found that the band’s rhetoric sounded much more polished and mature than, what I THOUGHT was their previous offering (and my first introduction to the band), 1994’s Punk in Drublic. Well, I was wrong… clearly. To this day I still stutter-step when mentally placing this band’s large output in any discernible order, and every time, White Trash trips me up. This nonsensical rant certainly does nothing to undercut the severity of this amazing album, and should (probably) be forgotten as soon as humanly possible (preferably sooner). Happy Friday! 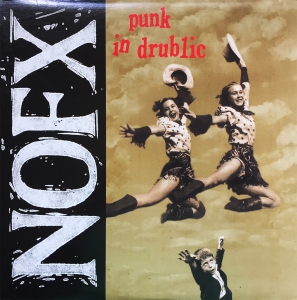 Arguably the soundtrack to my 1994 summer, NOFX’s fifth studio album Punk in Drublic saw a slight cover variation between the compact disc and the vinyl release. For unknown reasons, the CD had a pink sky behind the floating rodeo queens and the pervie kid below, while the vinyl version (as you can plainly see here) has a light brown sky.

Serving (more or less) as the band’s greatest hits album (though, as previously stated, is a proper studio album), Punk in Drublic features the following personal favs: Scavenger Type, Lori Meyers, The Brews, Linoleum, Don’t Call Me White, and Punk Guy. A dubbed cassette version of this album (the B-side being Pennywise’s 1995 classic, About Time) lived inside my truck for a solid three years, and was constantly turned down (or off) by frequent riders as being “not universally enjoyable.” Oh, what I wouldn’t give to experience this album fresh for the first time again. 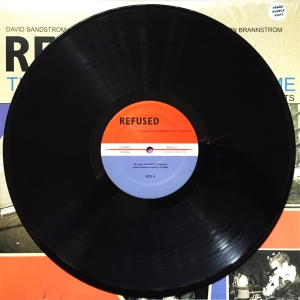 This 2015 Hot Topic exclusive has gotten me a little more excited than I probably should be. For one, The Shape of Punk to Come is by far one of the best albums ever to invade my ears. It’s heavy, melodic, technically insane (the percussion), and it killed the band (2015’s forthcoming Freedom aside). I owned the original since its 1998 release, and have since acquired a double blue, double red, double clear, and now single disc translucent purple version. What I think gets me riled up more than (almost) any of my other versions (clear vinyl will always be the treasured version of any version of any album) is that at first glance, this puppy looks like a straight black record. For a split second upon emerging this gem, I thought it was a mistake and panicked, but after closer inspection, the darkness, as it turns out, is eclipsed by a deep, moody, purple cloud. I love records that look like nothing but are secretly hiding their inner beauty, which, if you think about it, mirrors the album perfectly. Yeah, a little over excited for this one. 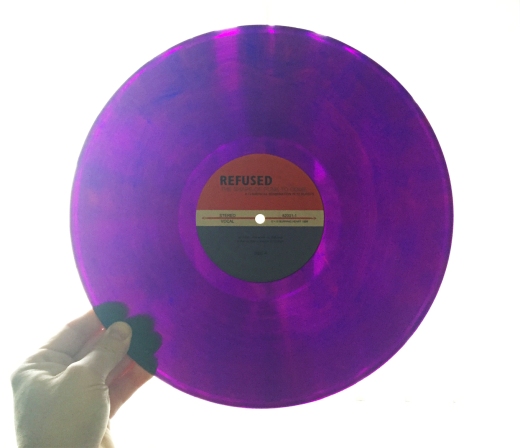 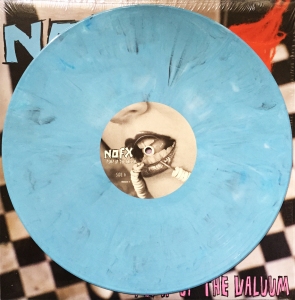 2000’s Pump Up the Valuum was just about the time I started to “respectfully” lose interest in NOFX. As one who is prominent in giving respect where (crass) respect is due, I’ll always hold the NOFX hand close to the chest, but at a certain point, abandonment seems a worthy option.

I doubt I’ve heard this album in over 15 years… that, is my cross to “badger.” 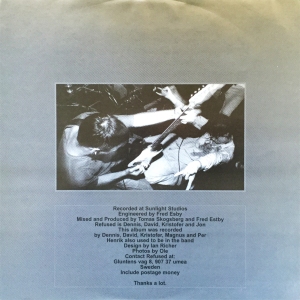 No, you’re not still dreaming, and yes, as it seems, Refused are not fucking dead. Pitchfork has the brand new track, Elektra, streaming right now, and you can pre-order Refused’s first album in 18 years directly from the Epitaph store. With an expected release date of 6.30.15, it’s without question that this summer is going to be imperative. 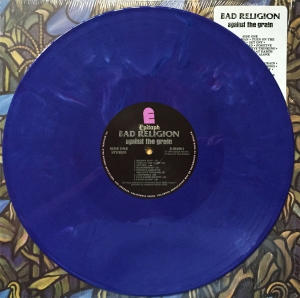 Bad Religion, and their 1990 follow-up to 1989’s epic No Control, brought to the mainstream another lasting SoCal mainstay with Against the Grain. Here, reissued on 660 pressings in lush, purple vinyl from back in 2010 (a nice even number), was a Hot Topic exclusive release. I believe I acquired this number from the Ventura, CA Pacific View Mall Hot Topic, which, I must certainly add, had absolutely no view of the Pacific. Whatever, I knew what I was looking for, and here she is, safely resting with her adopted siblings. 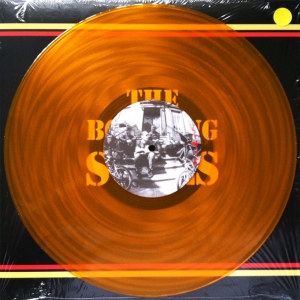 Last year, and 17 years after the initial release of Jersey brats, The Bouncing Souls’ self-titled, and 3rd album, Epitaph released this gorgeous gold vinyl reissue exclusive to their online store. Limited to only 500 copies, I’m a bit surprised to report that this little gem is still available directly from Epitaph. (Here is a link if you’re interested.)

The Bouncing Souls is a very contagiously energetic album, falling in line with their debut The Good, The Bad & The Argyle, and their sophomore effort, Maniacal Laughter. Their 4th offering, 1999’s Hopeless Romantic is brilliant in its own right, but sees the band maturing a bit, or as much as a pop punk band from the east coast can mature over two years. All in all, the first four efforts by this disorderly group are unmistakably essential, and a little color never hurt the cause, either.