This playful little selection sounds exactly like one would imagine by the parrot-laden cover and a title that is about as on-the-nose as could be humanly conceived. Throwaway titles for this album could have been: Riding the Coattails of the Rising Star, Harry Belafonte and His Successful Calypso Sound and This is Calypso Music, You Narrow-Minded Yankee.

Ok, I’ll admit, the only other Calypso music I’ve been exposed to was indeed Harry Belafonte, so this write-up isn’t going to be anything near groundbreaking (not that there would be any worry of that to begin with).  So, that having been stated, here goes:

This is an exceptionally fun album! The singers, both male and female HAD to be sore with grinning stretch marks from the making of this album. It’s good-time music. Plain and simple. Did your dog just knock over his water dish for the 17th time during the last commercial break of Gentle Ben? This album will help cheer you up. Did you just find out that your spouse has been secretly cheating on you with your younger sibling and that the raised papules on your skin sustained while swimming in that lake in early June may in fact be Swimmer’s Itch? Calypso Holiday will free you from this and seemingly ANY First World trouble.

So, Wikipedia tells me that, ahem, “Calypso is a style of Afro-Caribbean music that originated in Trinidad and Tobago from African and European roots.” Being neither African nor European, I proceed to Google “Trinidad and Tobago. “ Well, Oxnard California this is not! The women are beautiful (and wearing next to nothing), and that has GOT to be some of the bluest water I’ve ever seen (Probably Photoshopped). I’ve never had any sizable itch to travel south of San Diego, but a Port of Spain vacation has just made my bucket list.

Focus track for side 1: Dance de Limbo (Track 6). I challenge any of you to listen to this song and NOT nod your head to the simple pleasures of the religiously pure Calypso sound. Think back about that pool of water on your kitchen floor… You are now getting thoughts of raiding the closet for a broom with which to start a Limbo. Get to the back of the line, buddy, and fix me another Flying Masturbator. (It Exists) 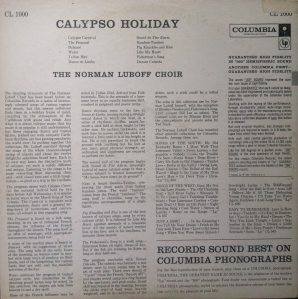 The first track on side 2, Sound de Fire Alarm begins an awful lot like Belafonte’s Jump in the Line (Shake Senora). I’m going to be thinking of this song while the “several-times-daily” fire trucks roll by my window to the rescue of some poor cat stranded up in a tree. Do cats still climb trees on LA’s west side?

Columbia Records put out this release in 1957, just 1 year after RCA’s release of Belafonte’s appropriately, and also on-the-nose album titled simply, Calypso. That album, having been only Belafonte’s 3rd, went on to sell over a million copies and spent 99 weeks on the U.S. Billboard charts. So, Columbia Records, being nether based in Columbia NOR, seemingly, having a creative bone in their corporate skeleton, decided to cash in on Mr. Belafonte’s raging success. As I’d mentioned, Belafonte is the only other Calypso artist I know, but I can promise that you’ll only read his name 1 more time during this write-up. Belafonte.

Allmusic.com doesn’t rate Calypso Holiday, or even provide an album cover. What type of flabbergasting tomfoolery is this! Somebody should write a letter. Here is their address:

Mr. Luboff unfortunately met his demise in September of 1987. I was eight then, and it would be close to fifteen years until I would even hear the poor man’s name. Well, he was talented, so I doubt he was poor, just poor in the sense that he’s now dead. For all I know he may have wanted to die, which would mean his death wasn’t poor at all. He had lung cancer which, I imagine doesn’t feel like a dip in the Caribbean Sea. Maybe his death was something of a sweet Calypso melody, softly kissing the ears of another eager listener. His NYT Obituary can be found here, if you’re into that kind of thing: Obit

Well, now I feel bad, having ended such an uplifting album on a morose disposition.  The inevitable Yin to the Calypso Yang, I guess.

Quickly, the back cover suggests “Records sound best on Columbia phonographs.” So, remember that the next time you’re shopping for your next hi-fi home stereo system. Or don’t. I won’t know.