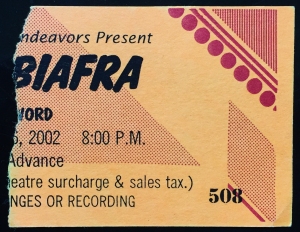 Witnessing Jello Biafra’s spoken word performance at Madison, Wisconsin’s Barrymore Theatre was something of a marathon… to say the very least. I’m happy to have experienced this entertaining sprint, though the unexpected 4+ hours eclipsed the rest of our evening’s planned activities. All of this is irrelevant, of course, because we were told, firsthand, about the brutal and legal-laden break-up of the Dead Kennedys. If invited to do it all again, I’d probably say yes, which is what you should say if you see Jello’s name pop up on one of your local theater fliers. The man is a legend, a pissed off legend, but certainly worthy of the nominal cover charge.

Santa Ana kicked some solid ass and brought out some heavy, legendary hitters. Featured here is (insane / genius / crazy person) Jello Biafra with his Guantanamo School of Medicine. For only $20, we witnessed not only the best live band of our generation (Rocket from the Crypt), but also a few Dead Kennedys classics. I wasn’t expecting, or remotely prepared for the latter. Good day, indeed. 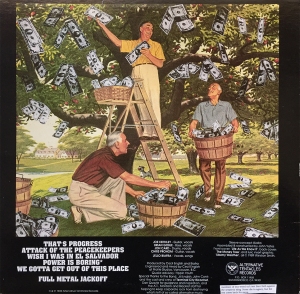 Winston Smith’s, The Money Tree pairs perfectly with Jello Biafra’s anti-military, socially-conscious-Kool-Aid-drinking, leave-no-stone-unturned-rant-machine on Alternative Tentacles’ 1989 release, Last Scream of the Missing Neighbors. One of the two records spun today (the other being The Zombies’ Odessey and Oracle, side 2… twice). 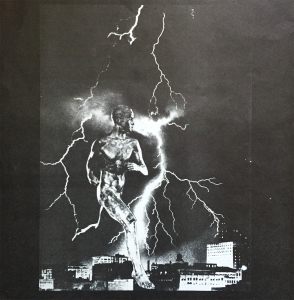 A pleasant surprise was found today whilst digging through the “B” section of the home library. A forgotten purchase (apparently for $10.99 from Amoeba, way back before their prices skyrocketed), Jello Biafra with The Melvins’ 2005 effort, Sieg Howdy! To say I was giddy would be putting it mildly. That, was the upside. The downside… maybe my collection is getting away from me…

In 1987, industrial-metal pioneers, the illustrious Ministry, teamed up with straight-edge mogul, Ian MacKaye (of Minor Threat and Fugazi), for an ambitious, yet magnificently executed collection of hardcore punk-industrial hybrids. Calling themselves Pailhead, the short-lived supergroup released six tracks over three releases and a comp. Featured here is their first record, well, the 12″ version of it, titled I Will Refuse. It’s not surprising that the record received both a 12″ and 7″ release, catering towards both the industrial (12″) and punk crowds (7″) respectively. Swap out MacKaye for Jello Biafra, add a few years (1989), and you’ve got LARD, another, more long-lasting venture into the punk-industrial genre that these Pailhead fools almost single-handedly established. It’s not perfect, but it’s pretty damn close. Check ’em out.

Winston Smith, surrealist master of the collage has some deep rooted connections to Dead Kennedys and Alternative Tentacles Records (since before both their inceptions). In addition to having designed both the iconic Dead Kennedy’s “DK” logo AND the AT Records logo, Mr. Smith’s art has also been showcased throughout many, various DK inserts, as well as a handful of Jello Biafra-related album releases. His art for the back of Jello Biafra with D.O.A.’s 1989 Last Scream of the Missing Neighbors was featured on the cover of The New Yorker back in 2000. Guess what just made my “want” list. This piece is another ocular gem found in the lengthy insert for 1982’s Plastic Surgery Disasters. TONS of amazing pieces in this insert which is, of course, definitely worth seeking out.

Welcome to 1984. Are you ready for the third world war?! So go the lyrics spewed forth by Jello (Wahoo) Biafra in 1981’s We’ve Got a Bigger Problem Now (not featured on the album in which this insert was showcased). The Crass-like art featured within the multi-page booklet from 1982’s Plastic Surgery Disasters by Bay-area social norm killers, Dead Kennedys, acts as a sort of a pictorial accompaniment to this amazing, yet sobering album. Pulling little to no stops, Mr. Biafra and team eject a string of disturbingly accurate observations on every day life back in Cold War 1982. Oh, how strikingly little things have changed some 33 years later. Anyway, enjoy the art! 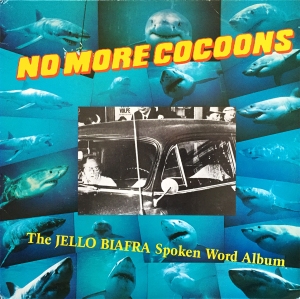 One endures several lessons throughout his or her record collecting education. Some of these lessons fall into the “That’s interesting… I never knew that!” category, while others fall within the “Are you #?*!@%^ kidding me? Well, I’m clearly an idiot!” lines. This is a post on the latter.

While visiting a friend in the Twin Cities some 15 or so years ago, I stupidly purchased Jello Biafra’s debut spoken word album for a very reasonable sum. Something like $4. What wasn’t called out, but what was painfully obvious in hindsight was that Jello Biafra’s debut spoken word album is a double LP, and I cluelessly walked away with only one record. The back sleeve CLEARLY indicates four sides of material, and I have no excuse for my blatant disregard for detail. To this day, I’ve only ever heard half of this album, and I’ve not sought out a full album version just so I could remind myself of my wayward ways. Lesson achingly learned.

As far as Lard is concerned, it really doesn’t get much better than 1989’s The Power of Lard. “Pity the poor trainer, in the stable when the racehorse farts,” “It’s ok to run out of butter in Zambia, just smear squashed caterpillars on your toast,” and “Poison Oak really is the aphrodisiac of the Gods” are just the red hot tip of the frozen iceberg found within the band’s debut track.

Fast forward to 2000 with the release of the band’s 2nd EP (three tracks). Their fourth and final release, 70’s Rock Must Die unfortunately features more tongue than cheek, and is by far the band’s ill-fated gift. For you see, there really is no bad Lard album, track, phrase, loop, what-have-you, there’s just spitfire Industrial brilliance, and their other stuff.

We could all use a little Jello in our diets. Be it the “from concentrate” blend found in the Dead Kennedys, or the 100%, all-natural, organic pickings from Jello Biafra’s spoken word albums, this political-protein based truth-nutrition is part of a healthy, balanced diet, and it’ll help you shed those conservative love handles with little-to-no effort.

This anti-war, pro-lower & middle/working class, pro-education, pro-environment, pro-urban renewal, anti-mainstream media, anti-racism, promotional works of undivided freedom will be written off by some as terrorist propaganda, but that certainly doesn’t make it wrong, or worse, truthful. An exceptionally dense piece of work, this double LP is Jello’s third spoken word album, and requires repeat listens in order to absorb the steady waves of detailed and cited research that, for reasons that are all too obvious, make him a threat to a system set-up to keep the poor, the mute, and fearful at bay.

This should be required listening material for 6th graders across the nation. Black and white are not the only colors in this uniform spectrum we are all a part of, and what’s frustrating, is that so many will blindly say that black and white aren’t really colors at all. Distraction, the oldest and most powerful guise in maintaining power the world has ever known.

Oh, the power of LARD… three tracks, clocking in at just over 37 minutes, and the feeble-minded, tight-rolled pant leg sporting, baseball card collecting, 9-year-old version of myself would never be the same.

Now, keep in mind that it wasn’t until my college years that I was exposed to the all-star match-up between the repetitious poundings of industrial metal Godfathers, Al Jourgensen and Paul Barker, and the politically motivated snarls of Dead Kennedys’ frontman, Jello Biafra. I chuckle to myself in wondering what my 9-year-old self would have thought of this album upon hearing it back in 1989 when it was first released. I probably would have had a nervous breakdown and gone missing for three or four days. Oh, what could have been?

The Reagan Era produced arguably the best collection of anti-American, pro-working class Hardcore Punk this country has ever seen. Leading the pack of such inspiring bands as, Black Flag, Descendents, Minutemen, Bad Brains, Youth Brigade, Minor Threat, and Misfits, the uncompromising Dead Kennedys allowed for their front man, the eccentrically morbid-genius Jello Biafra, to satirically rave and rant about his dismal outlook on society… but you know, with wizard-like fervor.

Not unlike Frank Zappa’s sarcastic approach to lyric writing, Jello Biafra taunted the press, California Governor Jerry Brown, and the military draft (to name only a few), often to hilarious effect. Biafra could have easily been a strikingly successful stand-up comedian. He’s like that idiosyncratic great uncle that won’t shut up about ANYTHING that’s on his mind (“let’s lynch the landlord,” “drug me with your crossword puzzles,” “the economy is looking bad, let’s start another war,” stuff like that), but who isn’t at all incorrect in his genial ramblings. The music is fast and sometimes ventures into such conflicting genres as Rockabilly, Spaghetti Western and Surf.

Fresh Fruit for Rotting Vegetables was originally released on September 2, 1980 in the UK with the familiar black cover. I.R.S. (the label, not the hording institution) issued an unauthorized orange cover for the album’s US debut. The band was animate in protest over this decision, and the now rare orange cover was withdrawn and re-released with the original black cover. I forgot that this version of the album drops in Police Truck on the first side between Let’s Lynch the Landlord and Drug Me. Police Truck isn’t released on the original UK version, but was instead offered as a b-side to the Holiday in Cambodia single.