One Nation, under Groove… Presented here is a rather nifty insert to Nation of Ulysses’ second album, Plays Pretty for Baby. Fancy yourself a pair of Star Trek Vulcan Ears, you’re in luck. Surprise Packages go for a cool $1 (circa: who knows?), and the classics like X-Ray Specs and the party favorite, Vibrating Shocker get equal page time with Trick Black Soap (which makes you look like Hitler, apparently), and a Midget Spy Camera (they maybe should have reconsidered the title of that one). Let’s face it. Who in their right mind could turn down an Electronic Lie & Love Detector? It detects love AND lies. Not me, I’ll tell you what (he says in elderly man voice). Lots to explore here while you spin some fascinating DC hardcore. Fun for the eyes, AND the ears. Enjoy. 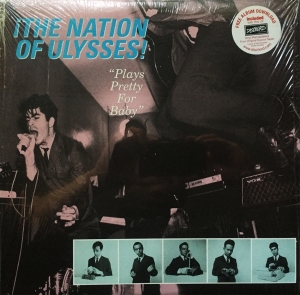 God, I love this band. One of the most unappreciated and exceptionally underrated bands in recent memory. I’m not too familiar with Plays Pretty for Baby, the band’s second album, but their debut, 13-Point Program to Destroy America is so explosive, I’m a subscriber for any and everything this short-lived gang spit out. Hardcore punk fans, it doesn’t get much better than The Nation of Ulysses. 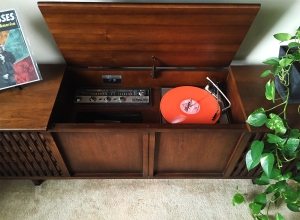 Today’s midday gesture of obscenities to the neighbors (who are all lovely, btw) came in the form of tangerine sweetness offered directly from Dischord Records. Fellow wallmates need a sudden and unscheduled jolt of energy every once in a while. They’ve said as much, if only in my head. At the very least, exposure is an educational experience.

Spreading the fear of violence through the comforts of vinyl since 2013. – The Prudent Groove 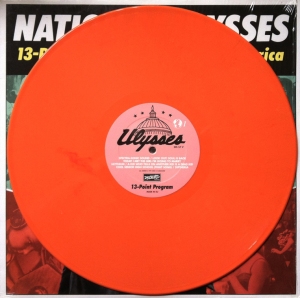 Originally released in ’91 on Ian MacKaye’s Dischord records, DC’s The Nation of Ulysses unleashed an intensely uncompromising hardcore classic with their debut, 13-Point Plan to Destroy America. This citrus flavored beaut is limited to 1000 copies and was released back in ’08. If you’ve not heard Ulysses, think of a slightly more loosely formed Fugazi on four pots of double brewed coffee. Not your grandfather’s music, unless your grandfather was a former rager, but 13-Point is perfect, among several other times, for late Friday afternoons at work after an excruciatingly busy week.