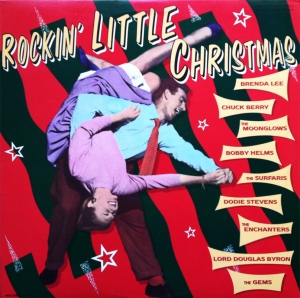 Brenda Lee was mindful enough to remember us this year, and put together a rip-roarin’ collection of rockabilly and surf rock tidings of good cheer to keep all of us, especially those in the colder regions, busy and movin’ this holiday season. Kickin’ off this 12-track comp (released in 1986 by MCA Records) is Little Miss Dynamite’s (aka Brenda Lee) 1958 classic, Rockin’ Around the Christmas Tree. What follows is a musical sleigh ride of body movin’ classics from Bobby Helms & The Anita Kerr Singers, Dodie Stevens, the Surfaris, Chuck Berry and others (others is not a band, I just didn’t want to type up the rest of talented acts featured on this flawless album…).

This record in particular generally gets more spins each holiday than the other knots in the holiday tree library. Played again, for the 3rd time just yesterday, I foresee (Brenda Lee Presents) Rockin’ Little Christmas to fill these walls at least three more times in 2013. After that she’ll head off to the dormant “Christmas section” and hibernate for a good 12 months. At this point, I’m just about over the whole Christmas music deal, but I agreed to something and I’m sticking with it (facepalm). 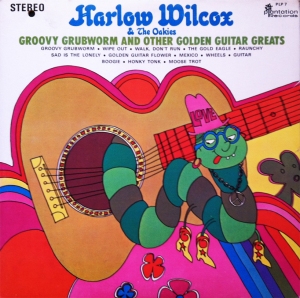 I’ve got to admit, albeit amidst a cloud of guilt and shame, that I’ve been in a classic country mood since returning from my recent holiday in the rural Midwest. Yesterday I forced my girlfriend to join me in walking down the dusty road of Roger Miller and his hillbilly classic, Do-Wack A-Do, and lately I haven’t been able to stop Jeannie C. Riley’s Harper Valley P.T.A. from spinning inside my head. So with that frame of reference in mind, I offer Groovy Grubworm and Other Golden Guitar Greats by none other than Harlow Wilcox & The Oakies.

Now, this is the kind of “country music” I can get behind. No lyrics about hound dogs slurpin’ on Sally’s slippers, or Fakey-Flakey Hearts, just 12 tracks of electric guitar with just the right amount of twang and driving backbeat. Don’t even get me started on what the masses consider “country” music by today’s standards. In my cocky ignorance, I’ll proudly refuse to listen to any so called “country” released this side of 1986 (I stop with Dwight Yoakam’s Guitars, Cadillacs, Etc., Etc.). This is, to be blatently honest, the only reason I can justify listening to country music in the first place. Ok, rant over. 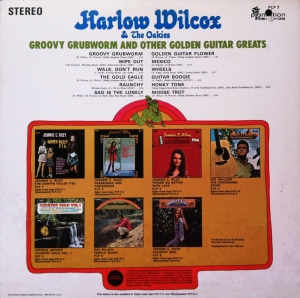 You’d think by the stoned out, tree-hugging grubworm on the cover that this album is far out, man. Instead, Harlow Wilcox & The Oakies are strikingly conservative in re-imagining such classics as The Surfaris’ Wipe Out, Johnny Smith’s Walk, Don’t Run, as well as dropping in four original compositions of their own that match seamlessly with the rest of these compelling classics.

Groovy Grubworm feeds that bug, er…worm, for classic, guitar-driven country music. I suspect that it’ll only be a matter of days until my mood shifts and I’ll want nothing to do with country music for the unforeseeable future, but until then, I’ll grab me a beer, and my lady, and we’ll create our own little rustic oasis amongst this sea of 3.8 million Los Angelenos. My sincere apologies to my neighbors in advance.