So, for this coffin I’m about to open, this is where I stand… the Ramones are NOT, in my humble opinion, punk. Were they influential monarchs of the mid-70’s rock-crowd-extravaganza? Yes. Grandfathers of punk? (Fuck) no. Proto-punk? YeAH! Where does Death factor into this equation? If the Ramones are, globally considered punk, than Death, without a doubt should also be included into the fold. Disagree? That’s your right, but you’re wrong. 🙂 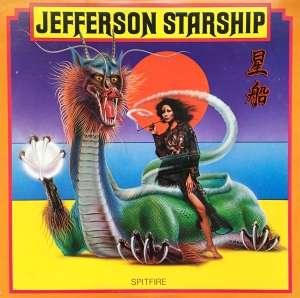 If I were to say that Salt-N-Pepa’s Push It played, on vinyl, while the SO and I enjoyed fondue at the dinning room table, would that make up for the sorry fact that I was too busy at work today to research and compile a narrative for today’s scheduled post on Jefferson Starship’s 1976 album Spitfire? No? Well, then, shit. At least I was able to enjoy Salt-N-Pepa’s Push It on vinyl while dipping delicious food bits into boiling broth to satisfy my stomach. Choose your battles, kids.

You’ve got to love Bernard Herrmann. Yes, that was an overly simplistic statement. Consider what this, exceptionally short list of films would have been like without the brilliant Herrmann touch: Vertigo (1958), Citizen Kane (1941), Psycho (1960), The Day the Earth Stood Still (1951), and his final score, Taxi Driver (1976).  I want not to imagine an inhumane and colorless world such as that. Do you? I’ve said it before, and I’ll say it again… ad nauseam. Give credit where credit is due, kids.

Percy Faith is, in fact, NOT a dirty-nosed socialite unwilling to show her teeth when faking a smile, but instead, a master of mood music essentials. A Canadian who reigned throughout the 50s and 60s, Mr. Faith recorded into the mid-70s until his untimely death of cancer in 1976. This, a Taiwanese bootleg record on Taiwanese colored vinyl, serves as a subtle homage to a favored orchestral composer.

Shamefully, I tend to overlook Kris Kristofferson when casually picking a record with which to spin. Last night’s viewing of Taxi Driver lit a pop-country fire under my ass, which necessitated a spin of this album, The Silver Tongued Devil and I, featured in the above mentioned film. Much too much to absorb in one sitting, the craftwork of Mr. Kristofferson’s wordplay leaves little to be desired, and creates a picturesque landscape of trials and bitter tribulations, worthy of even the walking contradictions among us. Travis Bickle would certainly approve.

Ok, so it may be a little early for scotch and/or rocks, but The Band of the Black Watch, and their merry-bagpipe-playing-parade-music, is just the right brand of kilted syncopation for this dreary Monday morning (it is certainly not a dreary Monday morning, I just enjoy the word dreary… and lagoon… lagoon is a fun word to say… I invite you to say it aloud right now… lagoon).

Let me tell you, hearing an official military unit consisting of brass and reed instruments performing Caribbean Honeymoon is definitely something I can honestly say I never thought I’d hear. This three minute and seven second window into the rivers of Heaven make me want to march off into battle, presumably to confront the individual whose sole purpose is to end my life, while simultaneously drinking a Mai Tai and holding the hand of my newly acquired soul mate.

Like a flowing bloodbath of sun-soaked romance, The Band of the Black Watch delivers a combination of lighthearted, side-to-side-swaying, maniacal military music that would make any citizen of Scotland proud beyond their years. 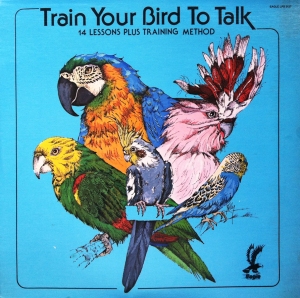 Are you a lonely bird owner who, until now, hasn’t realized your life lacks that proper amount of relaxing, mundane conversation with your trapped, feathered friend? Well, didn’t you come to the right place, you crazy little bird owner, you? Yesterday I unearthed this remarkable album at Goodwill, and with a morbid curiosity the size of say, a Lincoln Town Car, I rushed home to discover what a record specifically designed to train a bird to mimic say, a monologue written by Aaron Sorkin, would actually sound like.

If there was an award for the most useless, ridiculous, unnecessary, wholeheartedly avoidable record ever pressed, Train Your Bird to Talk would win it hands down. That being stated, I don’t reconsider my purchase for a moment. After all, you never know when 3 ½ minutes of a woman saying, “hello pretty bird” might come in handy.

Cuts so deep, they hit the bone! Robert “Kool” Bell and his groove-Gang deliver brass-happy, (b)ass-slappin’, tummy-rubbin’, good-time-Saturday-night, Funk & Blues (F&B) music. There must have been a sizable influx of babies born 9-months after the release of this album.

Kool and the Gang effortlessly transition from dance floor front-runners to dusty, sun-filled, carefree, early evening comfort music. Because, you know, you need to get-down-on-it just as often as you need that lazy stroll through the park with your hands in your pockets. Kool was hip to this, and it’s apparent throughout Open Sesame.

A very, very upbeat album, Open Sesame’s main focus is, without a doubt, the single most popular theme throughout all pop music: Love. With titles like, Gift of Love, L-O-V-E, and the 3-minute lyrical chant of “Whisper you love me” on the Side 2 opener, Whisper Softly, Kool and the Gang make no effort to hide the untimely power that drives their feel-good approach to making excellent groove music. 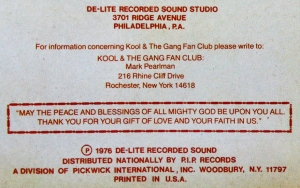 The highlight to this album would have to be Super Band. With lyrics like, “Super-cali-FUNK-a-listic-expi-ali-docious, the Super Band,” how could you not fall in love with this band? I mean, they’re super! They say so themselves!

1976 must have been a 365-day party. It’s no wonder the masses were hung-over for 1977 and the early beginnings of arguably the most important genre in the history of music: Punk. 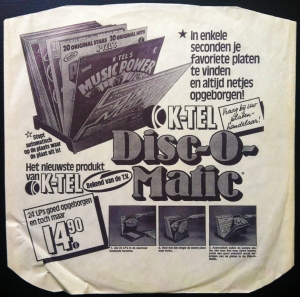 Lodged inside an obscure comp album from the Netherlands, this glorious insert advertises K-Tel’s celebrated Disc-O-Matic in pure, late 70’s peculiarity. Printed almost entirely in Dutch, this ad boasts about the magnificent wonders of this record organizer that’s bekend van de T.V. (known from the T.V.).

Holding 24 LP’s, this chincy looking piece of plastic allows in enkele seconden je favoriete platen te vinden en altijd netjes opgeborgen (in a few seconds your favorite records to find and always neatly stowed away), or something. There is a bit of disconnect between languages on Google Translate, but you get how amazing this gadget is.

Interesting how there’s no contact info for K-Tel. Oh!!! I guess Vraag by uw platen-handelaar means roughly, “contact your record dealer.” So, this upcoming Record Store Day, be sure to ask your local brick-and-mortar about K-Tel’s Disco-O-Matic. You’re sure to disappoint yourself.

Nobody ever outgrows his or her ELO (Electric Light Orchestra) phase. I certainly see no need to pull the electric plug, switch off the light, or tell the orchestra to go home (take your pick).

Kicking off with a spry, ethereal bleep followed by the vacant ringing of a telephone doomed to be acknowledge, Telephone Line is a lulling journey through the sung cries of our hero (Jeff Lynne) as he attempts to regain contact with a former lover, but you know, told amongst a charming bed of orchestral Rock ‘n Roll accompanied by elegant back-up vocals.

Telephone Line is a sad tale of that (oh so familiar) slow burn that inevitably comes when the love between two treasured sweethearts fades away, only to die a slow, excruciating death while both parties curse the heavens in complete emotional anarchy. I’m over it now, but there was a time when this song hit home a bit too aggressively.

Telephone Line is from ELO’s monumentally successful 1976 album, A New World Record. This single however was released on green vinyl in 1977. If you’ve ever heard ELO, chances are you’re hooked. If you haven’t, (WHAT THE HELL ARE YOU WAITING FOR?) I’d humbly suggest starting with A New World Record and its awe-inspiring single, Telephone Line. 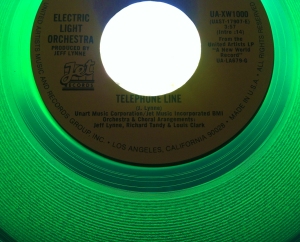