It may have began in Afrika for the rest of the civilized world (as well as the uncivilized… I’m looking at you, Oxnard, CA), but for Tom Rowlands and Ed Simons, the foundations of Big-Beat-Funk were forged in the furious fires that first began in Manchester, England.

It Began in Afrika was the first single off 2002’s Come With Us, and peaked at number 8 in the UK. An exclusive, DJ only version of the track was released as Electronic Battle Weapon 5 (part of the 2nd disc offered in 2008’s compilation, Brotherhood) in June of 2001, before it was reworked for a wider audience on this official release with the more identifiable title change. 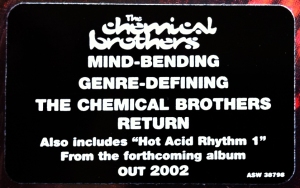 A sticker on the front sleeve lists the b-side, Hot Acid Rhythm 1, as a track to be offered from their forthcoming album, out in 2002. Hot Acid Rhythm 1 does not, however, show up on Come With Us, and as far as I can tell, only exists on this single.

It’s nearly impossible to wrap my head around how profound the “throw away” tracks are in the vast, blood-boiling, beat banging, Chem Bros catalog. Literally EVERYTHING they release is top shelf ear stimulants, and as always, comes housed in digable and displayable cover art.