A lucrative single off Surrender, the full length I DON’T possess by premier big beat British brainiacs, The Chemical Brothers, Let Forever Be represents more the wispiness of summer than it does button-up the autumnal ambiance of fall. A worthy mind-dance nonetheless, Let Forever Be poses the unanswerable question, “How does it feel like?”

Come With Us is an explosion of heart-stopping, blood-bursting, mind-altering dance music even your mom can get behind. No prescription is needed to ride this 2002 rager. Part submerged sonar ping, part stress-inducing orchestral outbreak, this three-track single is a marathon run at sprinting speeds where sweat falls to the ground with impeccable rhythm.

I have yet to hear a Chem Bros track that I didn’t fall in love with. They’re much like Creedence in that regard. It is a personal goal (quite easily an obsession) to own every record The Chemical Brothers ever released. This, like any and every other Chem Bros release comes deeply recommended. 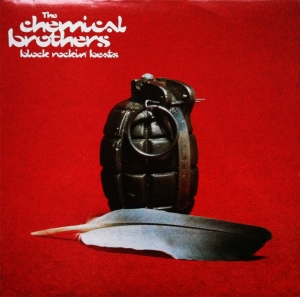 Block Rockin’ Beats was the first Chem Bros track I’d ever heard. Stupidly mistaking it for Hip Hop, I was properly schooled, then introduced to the slam-happy genre that is Big Beat.

Chances are, you’ve heard this Grammy winning song on TV, in a film, or blasting from the alley around the corner from where you get those delicious French pastries. If you haven’t enjoyed this, which I’m convinced is the Chemical Brothers’ most popular track, you should take it for a spin around the ol’ block.

Editor’s note: I’ll be out of the office on holiday for a bit and will, obviously, be away from my music library. I haven’t decided exactly what I’ll post about, but come hell or higher gasoline prices, I’ll post something after every sunup. I’m sincerely looking forward to getting the hell out of Los Angeles for a little while.

It may have began in Afrika for the rest of the civilized world (as well as the uncivilized… I’m looking at you, Oxnard, CA), but for Tom Rowlands and Ed Simons, the foundations of Big-Beat-Funk were forged in the furious fires that first began in Manchester, England.

It Began in Afrika was the first single off 2002’s Come With Us, and peaked at number 8 in the UK. An exclusive, DJ only version of the track was released as Electronic Battle Weapon 5 (part of the 2nd disc offered in 2008’s compilation, Brotherhood) in June of 2001, before it was reworked for a wider audience on this official release with the more identifiable title change.

A sticker on the front sleeve lists the b-side, Hot Acid Rhythm 1, as a track to be offered from their forthcoming album, out in 2002. Hot Acid Rhythm 1 does not, however, show up on Come With Us, and as far as I can tell, only exists on this single.

It’s nearly impossible to wrap my head around how profound the “throw away” tracks are in the vast, blood-boiling, beat banging, Chem Bros catalog. Literally EVERYTHING they release is top shelf ear stimulants, and as always, comes housed in digable and displayable cover art.

The Chemical Brothers are known the world over for their elaborate, Big Beat landscapes. This isn’t news. Something a little less talked about however, but just as obvious and synonymous with their crunchy, heart-stopping grooves, is their visual persona. I’m not talking about their mind-melting stage shows. Instead, I’m talking about their nostalgically futuristic cover art and album design.

Presented here is not even the tip of the iceberg. The Chem Bros have been penetrating ear holes for over 20 years, and have released seven proper albums, one soundtrack, six EPs, five comp albums, one live album, 15 promo singles and 26 singles… with an eye catching design, layout and scheme unique to each release. This amazing print was offered as an insert in their 2008 double LP comp album, Brotherhood.

I’ve got a bunch of Chem Bros releases, so keep your eyes peeled, and your ears lubed because the Groove is about to go Big Beat berserk.