Newly added to the collection is this Dancing Birds 7″ from 1999 (or 2000 by the back cover). Limited to 200 copies, this yellow / black mix is the least common among the following others: 2000 on black, 550 on red, and another 1650 on black for the 2nd pressing. One overpriced 7″ at a time, the RFTC discography is slowly taking shape. We didn’t have time to spin / digitize this guy this morning, so it looks like our Tuesday evening plans are already set in motion. On a side note, how the hell is it already April 25th? I don’t expect an answer, that was a rhetorical question… carry on. 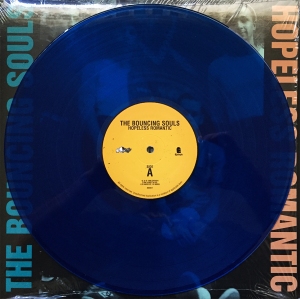 Bears lose, but that doesn’t mean that the Chicago-based music community need be ignored… The Lawrence Arms, and their debut album, A Guided Tour of Chicago (232 of 500) reminds us that Jay Cutler (er-er) is, if nothing else, a manipulative puppet for the Green Bay conglomerate. Go Pack Go!

What is it about hand-numbered releases that draws so much mild elation from the collector? Is it the rarity? The often, almost illegible scribble isn’t much of a draw. Perhaps it’s hoping to score as low a number as possible? Or maybe, in the case of this 2008 vinyl release of Lawrence Arms’ 1999 debut album, A Guided Tour of Chicago, the hand-written, numbered feature is just a bonus that accompanies this album’s debut pressing. Whichever the reasoning behind its appeal, hand-numbered releases certainly aren’t going anywhere, and to that simple fact, I’m remain indifferent.

Snapcase’s third full-length, 1999’s Designs for Automotion, yields the coveted #100 mark in the Victory Records catalog (VR100), and was released on black, white, orange (this), blue, red, and yellow vinyl. If you aren’t into Snapcase, but are a fan of Nation of Ulysses and Refused’s Songs to Fan the Flames of Discontent, you’ll love their melodic approach to the Hardcore genre. I had the pleasure (I think) of seeing them open for someone (The Bouncing Souls?) back in Milwaukee, and they blew my feeble mind. Snap to it and check out this band!

Star Wars references in sub-indy hip hop back in the late 90s were kind of a fanboy treat, and are almost immediately featured on this record’s b-side, Settle the Score. The third in a four-part series titled, The Blow Up Factor, Mr. Lif offers 3x versions of Farmland, the a-side, the previously mentioned Settle the Score, and a track I don’t remember ever hearing, You Don’t Knowstrumental. Released in 1999 on Grand Royal Records, this little 4-track is worth more to the diehards than to avid collectors of the medium, but for only $1.49 on discogs, this pressing is a steal!

A lucrative single off Surrender, the full length I DON’T possess by premier big beat British brainiacs, The Chemical Brothers, Let Forever Be represents more the wispiness of summer than it does button-up the autumnal ambiance of fall. A worthy mind-dance nonetheless, Let Forever Be poses the unanswerable question, “How does it feel like?”

Remixed by the illustrious Alexander Paul Coe (aka Sasha), this promo 12” features just two tracks, Out of Control (Sasha Club Mix) and its b-side, Out of Control (Sasha Instrumental Mix). Freestyle Dust, the sub-label of Virgin Records exclusive to Chemical Brothers releases, must have had no shortage of funds when it came time to press their abundant catalogue, because I don’t think I’ve seen a Chem Bros single sell for more than $3.99, this one may have been a cold $1.99, and a steal at that! If you’re out and about and a Chemical Brothers release catches your eye, probably due to their elaborate cover art, it would be wise to snatch it up, but quick. In a nutshell, preferably pistachio, great dance music can be found at prices that are Out of Control.

In June of 1999, Fat Wreck Chords released the optimistically ambitious Short Music for Short People, a novelty album featuring 101 bands spanning the punk rock spectrum in 30 second bursts. With grandfathers like Black Flag, Descendents, Circle Jerks, Misfits and Youth Brigade, to Fat mainstays Lagwagon, NOFX, Wizo and Strung Out, to fellow Epitaph Records mates Bad Religion, Pennywise, The Offspring and The Bouncing Souls, Short Music for Short People, as enjoyable as it is (and it really is), becomes exceptionally laborious when attempting to search for 1/101 of this record’s contents for just a 30 second reward. Lucky for me, I had a brief moment of clarity as a 19-year-old twit and picked up the compact disc version as well. That’s all gone as we wake up each day amongst the digital rays from our digital sun and pull up our digital socks and drive our digital stick-shift vehicles to our digital jobs to earn our digital wages and continue to get looked over for those digital promotions, but that’s neither here nor there.

As hilarious as it is catchy, and as arduous as it is enduring, Short Music for Short People is an aggressive achievement worthy of any open-minded listener. Also, you can learn how to make a bomb out of household objects on track 45, courtesy of The Offspring. Don’t try this at home, kids.

There is nothing more patriotic than a green record in the shape of the continental United States. John Linnell, of They Might Be Giants fame, showcases his solo abilities on this two-track appetizer from his full-length album by the same name. Actually, side two’s Louisiana is an unreleased track from the album and is only offered on this “Go America!” record, so if you needed any incentive to seek out this record, there you go.

Told from the perspective of a hospital bed-ridden patient, Montana is a catchy little song about said patient’s electric realization that the shape of Montana resembles that of a leg. I love the esteemed talents of the two Johns and their innate ability to write catchy, whimsical songs about seemingly banal subjects. I mean, we all have these little thoughts throughout our day, like, how I wonder if the birds in the tree outside my porch are secretly planning an all-encompassing war against the squirrel that knocked over their bird bell, but I don’t ever think to write a song about it! Kudos to John Linnell for taking the mundane and making it extraordinary.

Leave it to my clever girlfriend to figure out that Louisiana is a song about the annoying humidity engulfing the stale air within the imaginary walls that make up the state of Louisiana.  Referring to (the life-sucking demon that is) humidity as a blanket, John Linnell pleads for a break in the weather and asks that Louisiana, the state, to remove its hands from around his neck so he can breathe more clearly. A song about humidity… again, who looks to uncomfortable weather as a subject for a song?

If I’ve learned something from this green-tinted record in the shape of the contiguous United States, it’s that ANYTHING can be the subject of a song and also, I have no Earthly desire to step foot into the hellish wave of demon-heat known as Louisiana.