Squeeze out another indispensable new wave experience with 1981’s East Side Story. Though not as electrifying as their 1978 debut (Squeeze), or as pop-friendly as their second album (1979’s Cool for Cats), East Side Story shows, I believe, the greatest jump in maturity between their early, and essential albums. Whether you’re in the mood for a very well-written, new wave classic, or if you’re longing for the chorus to Tempted, East Side Story is just a 33 1/3 revolution away. 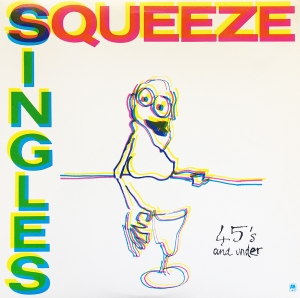 I was a little surprised to discover that I’d not touched upon arguably one of the greatest singles compilations ever to emerge from the early 1980s… Singles – 45’s and Under by Squeeze. She was my first introduction to the band, and I thought little to nothing about it upon first spin. Now, she’s one of my top 20 all-time releases. Copies are cheap, so if you find one, snatch it up!

Argybargy is a fun word to say in your head with a Morgan Freeman voice. It’s also the title of Squeeze’s third studio album. Release in 1980, Argybargy (thanks, Mr. Freeman) is home to the charters, Pulling Mussels (From the Shell) and Another Nail in My Heart. If I Didn’t Love You also appears on Argybargy but failed to chart even though it received decent airplay.

Squeeze’s first album is a fantastic, British firework of pop explosion. Here, it’s presented in fire-red vinyl, with the sticker promoting the classic, Take Me, I’m Yours. I can offer nothing more than this printed, advertisement, and an early morning photo of said fire-red record. If you don’t know Squeeze, you don’t know.

New Wave has always been a savory and integral source of audio protein. As a child of the 80s, the synth-lead, bass-droning enormity of some of my New Wave Favs (Bangles’, Walk Like an Egyptian, Animotion’s Obsession, and Dead or Alive’s You Spin Me Round (Like a Record) to name only a few) still offer a wealth of fascinating childhood memories that seem not to go away with sequential spins; for this, I am ecstatically appreciative. 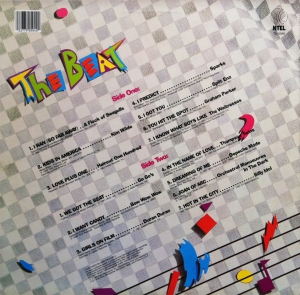 So, leave it to ol’ K-Tel to put together a 1982 comp (featuring none of the above mentioned personal favs), with a cover that’s two-parts Take on Me, and one part opening credits to Saved By the Bell. Overall this comp is a fairly decent representation of New Wave up to 1982. Personally, Squeeze should at least have had Cool for Cats on here, if not their more excitable, Slap and Tickle, but they didn’t ask me to contribute to this compilation… no sir they did not. I’m not entirely sure what I could have offered at the ripe age of three, but personal preferences aside, The Beat by K-Tel is a welcoming trip down (I Want) Candy Cane Lane, even if the sum of its parts comes a bit short of the high water mark.

If you were stranded on a remote island (that conveniently harbored electricity, speakers and a bomb-ass turntable), and you were only allowed to pick three albums with which to spin for your remaining, ocean-gazing days, what three albums would they be?

For me, the first two albums were no-brainers. Paul’s Boutique by the Beastie Boys, and The Kinks Are the Village Green Preservation Society by The Kinks. Choosing the proper versions, both albums are double LPs (1998’s Grand Royal reissue and 2011’s mono/stereo split), so you’re already a leg up on the island dwelling competition. The third and final album requires much more, overanalyzed thought. Do you play it safe and pick Abbey Road? What about The Beatles, also known as the White Album? Or, do you skip the 12” format altogether and grab your favorite song, which just happens to be a post-hardcore thrasher by the obscure Wisconsin band, Defacto Oppression? Certainly NOT an easy decision to make (in this overly voluptuous hypothetical), second-guessing is sure to follow after the inevitably dreadful decision is (finally) made.

Bruce Springsteen’s Nebraska garnishes some thought, but would probably be far too depressing… after all, these three albums will help feed, or deter the fact that you are, after all, stranded on a remote island. Emergency & I by the Dismemberment Plan is a considerably strong candidate, but would immediately be my number four pick. Bizarre Ride II (The Pharcyde), In Case You Didn’t Feel Like Showing Up (Live) (Ministry), This is Tim Hardin (Tim Hardin… duh), and Circa: Now! (Rocket from the Crypt) are all, exceptional lily pads on this thought pond, but none of them make the distinct cut.

London Calling (The Clash), Double Nickels on the Dime (Minutemen), Singles – 45’s and Under (Squeeze), Energy (Operation Ivy), Appetite for Destruction (Guns N’ Roses), which would easily be my number five pick, Black Monk Time (The Monks), and Fresh Fruit for Rotting Vegetables (Dead Kennedys) all lay floating in the salted sea of “never to enjoy again.” Damn, this post is depressing.

And the winner goes to… The Shape of Punk to Come… the quintessential soundtrack to my evasive youth wins the number three spot, and with little hesitation, I might add. Refused’s best, and another double LP, this top three has quickly turned into the top six, and would respectfully demonstrate, and/or adequately demolish my headspace for the rest of my delusional life. To pick three out of 2,800 is certainly NOT an easy gesture… if asked again tomorrow, I’d have a completely different roster. Oh, the joy, and immediate pleasure of viable options. 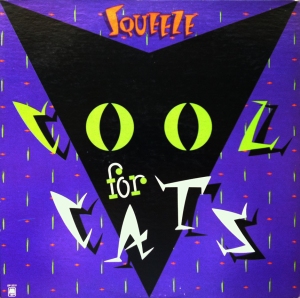 Squeeze snuck up on me. Hold on, let me start over. It’s imperative to mention how apropos that 1979’s post, the post representing the year in which I came into this world, contains the word, “Cats.” If you know me, you saw this one coming. If you don’t know me… I like cats.

Squeeze are like a sieve, an attention grabbing ear-whore in the best sense of the term. Not unlike The Kinks, Squeeze’s music is so damned good, so damned catchy, and so damned clever, that once you start listening to their music… THAT’S ALL YOU LISTEN TO! When I got into Squeeze, shamefully only a few years ago, I didn’t listen to anything else for nearly 3 months, and I’m not exaggerating. They’re that damned good!

With a hint of Punk’s aggression, and all the electronic qualities that make up good New Wave, Squeeze tickles your fancy in that slightly awkward, slightly dirty way, but leaves you begging for more… and more… you get the point.

Cool for Cats houses three of the best tracks in Squeeze’s varied palette: Slap & Tickle, Up the Junction and Goodbye Girl.

Up the Junction is a very sad tale about the rise and inevitable fall of a doomed relationship. A child is involved and the once adored couple no longer speaks.

I can’t tell if Goodbye Girl is about a woman drugging our protagonist and robbing him, or if it’s a story about the beginnings of a failed marriage. Either way, Goodbye Girl is a catchy little ditty, and in my opinion, Squeeze’s best.

Cool for Cats showcases Squeeze at the height of their innovative career. It’s a crowning representation of the stunning song-writing talents of Difford and Tillbrook. If you’re serious about music, and you don’t already own Cool for Cats, drop what you’re doing RIGHT NOW and find this album. You won’t be disappointed.