Light in the Attic released a beautiful remastered double LP of the classic Black Monk Time back in 2009 (original, Germany-only pressing from 1966 fetches a hefty $1500 price tag). Then came a nifty collaboration with Newbury Comics of a limited white vinyl pressing from 2016 limited to only 300 copies. Whichever your color of preference, Black Monk Time is essential spinning material.
October 9, 2017 1967, 2017 music, record collecting, records, The Monks, Third Man Records, vinyl, wax Leave a comment 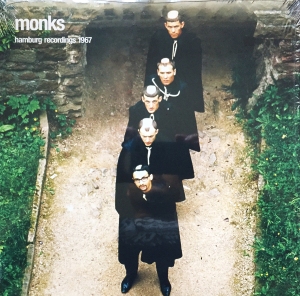 Third Man Records released a 5-track EP earlier this year of previously unreleased material from 1967 by The Monks. This copy, though reasonably priced at $10.99, was in fact NOT the hand numbered white vinyl version limited to 300 copies. All good, however, as the music within captures this obscure band during their (presumably) last recording session prior to their inevitable breakup. All-in-all, a necessary acquisition, if only for the sake of modern music history. 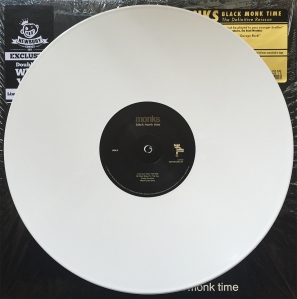 Already the proud owner of the 2011 bootleg, Black Time, which consists of the exact same opening 12 tracks, I’d passed up many an opportunity for the 2009 official reissue of this 1966 merciless album, Black Monk Time. That was, until yesterday’s trip to Amoeba. With no worthy Kinks albums, absolutely zero anything from Dan the Automator, no Nautiluss (that wasn’t already owned), and no reasonably priced Minutemen, I felt it was high time to bring this puppy home. One record I should have purchased was the red vinyl version of On the Prowl by Rocket from the Crypt. $35 for two tracks slipped me up, but now I wish I’d have thought more clearly. As long as I have air in my lungs, the hunt continues.
March 15, 2014 Misc 1967, Donovan, folk, Mello Yello, Mellow Yellow, music, record collecting, records, summer, The Monks, Vacuum Scam, vinyl 3 Comments

Mellow Yellow, the 1967 album by the Glasgow born, Scottish revolutionary, Donovan Phillips Leitch (as apposed to Mello Yello, the refreshing citrus beverage enjoyed during the bike riding summers of yesteryear), carries with it an aura, a golden, warming glow of sandal-wearing, ankle-wading, mind-clearing, beach-yearning temperaments of folky goodness, perfect for soaking in the warm, skin-kissing rays from that mass of incandescent gas we call the sun. 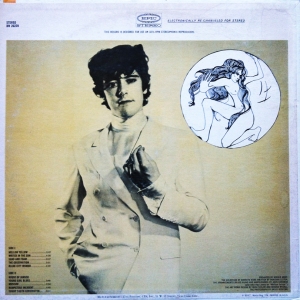 Certain times throughout the annual revolution of our inhabitable rock, the specific craving for particular sounds eclipses that of everyday listening pleasure. In December, it’s the Monks, in May it’s Vacuum Scam, and for whatever unknown (however wholeheartedly welcomed) reason, March is the perfect time for Donovan.

Now that the holidays are over (New Years isn’t so much a holiday as yet another excuse to party in excess), we can return to normal ramblings geared towards “real” music. You’ve gotta’ love the holidays, but man did I overdo it this year on the holiday ear candy.

I’ll try to get through this as quickly as possible, as I can’t help but assume you are still enjoying awkward family time. For the past four or so years, December has come to mean a few things: 1) the smog is down, 2) due to the mass number of LA transplants, there is a yearly exodus which leaves the streets clean and clear for the rest of us, and 3) for whatever reason, it’s Monk Time.

What is this Monk Time, you ask? Well, Curious Carl (not to be confused with Cowboy Curtis), Monk Time is that very special time of year when the inner monster craves the Earth-shattering sound of the original anti-Beatles. This sheer, rabid dog approach to 1965’s rock n’ roll was light-years ahead of its time, and although they only released one album (in Germany in 1966), these Five Upstart Americans (soldiers as they were) broke the mold with their inventive brand of cathartic, yet surprisingly melodic music. The Monks could be considered garage rock, if that garage were engulfed in flames and moments away from collapsing on itself threatening the lives of everyone within a three-house radius. If you’ve heard of the Monks, this is certainly not news, but if you haven’t, watch the documentary Transatlantic Feedback, and bug your local record store until they acquire for you a copy of Black Monk Time. Certain bands demand attention for their historic significance, and the Monks certainly fit that bill. I’m still in the market for my (obviously) reissue of Black Monk Time (originals go for over $600), but for now I’ll settle for the repackaged and almost identical 2011 release, Black Time.

Although the holidays may be over (and thank God for that… I did it to myself, I really shouldn’t complain… but I will), its rightful owners, the Monks, can once again reclaim December.

With the Big Boss Man (NOT the WWF actor) constantly hovering over my desk demanding new ideas on how to stay (or become) relevant, The Prudent Groove has begun a weekly audio odyssey that will drop every Sunday from here until the lot of us decides to up and quit this demeaning sweatshop.

In this, the debut outing for the willing ear canal, we hear from Bent Fabric, Duane Eddy, The Monks, The Shag, Tim Hardin, The Kinks (obviously) and Charlies. So sit back and get ready to judge, because The Prudent Groove is about to invade your personal space! KILL IT NOW! KILL IT NOW WITH FIRE!!

If you were stranded on a remote island (that conveniently harbored electricity, speakers and a bomb-ass turntable), and you were only allowed to pick three albums with which to spin for your remaining, ocean-gazing days, what three albums would they be?

For me, the first two albums were no-brainers. Paul’s Boutique by the Beastie Boys, and The Kinks Are the Village Green Preservation Society by The Kinks. Choosing the proper versions, both albums are double LPs (1998’s Grand Royal reissue and 2011’s mono/stereo split), so you’re already a leg up on the island dwelling competition. The third and final album requires much more, overanalyzed thought. Do you play it safe and pick Abbey Road? What about The Beatles, also known as the White Album? Or, do you skip the 12” format altogether and grab your favorite song, which just happens to be a post-hardcore thrasher by the obscure Wisconsin band, Defacto Oppression? Certainly NOT an easy decision to make (in this overly voluptuous hypothetical), second-guessing is sure to follow after the inevitably dreadful decision is (finally) made.

Bruce Springsteen’s Nebraska garnishes some thought, but would probably be far too depressing… after all, these three albums will help feed, or deter the fact that you are, after all, stranded on a remote island. Emergency & I by the Dismemberment Plan is a considerably strong candidate, but would immediately be my number four pick. Bizarre Ride II (The Pharcyde), In Case You Didn’t Feel Like Showing Up (Live) (Ministry), This is Tim Hardin (Tim Hardin… duh), and Circa: Now! (Rocket from the Crypt) are all, exceptional lily pads on this thought pond, but none of them make the distinct cut.

London Calling (The Clash), Double Nickels on the Dime (Minutemen), Singles – 45’s and Under (Squeeze), Energy (Operation Ivy), Appetite for Destruction (Guns N’ Roses), which would easily be my number five pick, Black Monk Time (The Monks), and Fresh Fruit for Rotting Vegetables (Dead Kennedys) all lay floating in the salted sea of “never to enjoy again.” Damn, this post is depressing. 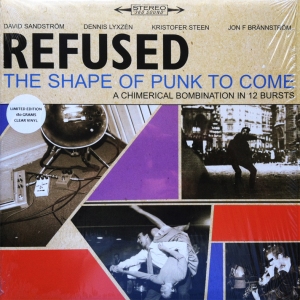 And the winner goes to… The Shape of Punk to Come… the quintessential soundtrack to my evasive youth wins the number three spot, and with little hesitation, I might add. Refused’s best, and another double LP, this top three has quickly turned into the top six, and would respectfully demonstrate, and/or adequately demolish my headspace for the rest of my delusional life. To pick three out of 2,800 is certainly NOT an easy gesture… if asked again tomorrow, I’d have a completely different roster. Oh, the joy, and immediate pleasure of viable options.

According to Liberty Records Inc. (Los Angeles 28, California), Martin Denny’s Exotic Percussion, Around the World With the Chipmunks, Bud and Travis in Concert, and 60 Years of Music America Hates Best are definitively, the personality sounds of the 1960s.

Forget about The Kinks, 13th Floor Elevators, Tim Hardin, Silver Apples, The Monks, Them, The Zombies, and the man in black… and for that matter, forget about the entire UK Encroachment (that’s what it’s called, right?), because Johnny Burnette, The Fleetwoods, and Bobby Vee are decade-defining personalities that history has proved to be as monumental as the title of this record label.

Liberty Records, like a symbolic statue of freedom, knew personality when they heard it. And thank goodness, because I don’t know what I’d do without ­all the tree-hugging, acid-dropping, tie-dyed skirt wearing, marvelous wonders provided by Bob Wills and Tommy Duncan.