Harry Nilsson’s 1974 collaboration with John Lennon falls a bit short from misguided expectations, but is still a necessary inclusion to any collection focusing on pop music history. Pussy Cats was hyped as having been recorded during Lennon’s 18-month “Lost Weekend,” a period he’d spend in the early 70’s apart from Yoko. Nilsson’s broken voice and (obviously) medicinally-influenced demeanor are something to note in this gluttonous series of 10 tracks. Buy it not expecting much, and you’ll be pleasantly surprised. This 2018 RSD release on hardwood vinyl is limited to 1500 copies. Enjoy. 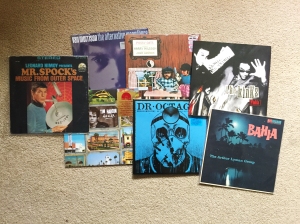 Presented here is our loot from this year’s Record Store Day. The big three were acquired (listed in order of necessity).

1973 was a good year for a lot of people. I wouldn’t know, personally, but Mr. Harry Nilsson released an album of 20th-century standards for his 10th studio album, whimsically titled, A Little Touch of Schmilsson in the Night, so 1973 couldn’t have been all that bad. Using Sinatra arranger Gordon Jenkins, A Little Touch clocks in at just over 36 mins over 12 songs, and though praised for Nilsson’s prominent vocals, it only received modest chart success. Regardless, A Little Touch is well worth the price of admission, and is a perfect spin for those foggy, Southern California days, or anywhere you can plug in a turntable.

Unfortunately, these are the only two Nilsson records in the collection. Something happened over the last few years, or appears to have happened anyway, which resulted in Nilsson album prices skyrocketing. I remember seeing casual albums for $8 – $10, where now they fetch upwards to $25-$30. And I’m generally only noticing this hike with Nilsson records specifically. I don’t know… something sure the hell is going on.

Casual Saturday listening. FINALLY finished up the “need to listen to” pile, so we were able to enjoy a few rounds of listener’s choice. Nilsson’s debut followed by Lagwagon seemed necessary. Cheers. 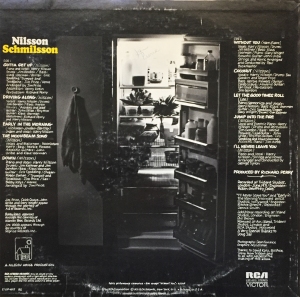 When snicker-snackin’ at 3:24 am, consider a salty toss of Nilsson (here, featured as Schmilsson). Calories don’t count at night, am I right?

As I fought inevitability this morning in an epic battle of comfort vs. responsibility, the lyrics to Gotta Get Up by Harry Nilsson began to loop inside my groggy head like a snooze-less alarm. I have no shame admitting my adolescent experience with the mighty Mr. Nilsson, having just “discovered” him via means of the sobering documentary, Who is Harry Nilsson (and Why is Everybody Talkin’ About Him?).

Call me a newcomer, a sap-hearted seedling, or a punk-eared Johnny-come-lately. Call me whatever you wish, just remember to call me a fan of Harry Nilsson.

Contained below is lost debris found amongst the sea of filth that is my PG work folder. I have no idea as to its context, nor what groovy slab inspired such nonsensical ramblings, but when you’re in a hurry, anything seems plausible. (If you need a music suggestion for today, check out Rocket from the Crypt’s Hot Charity, or Tool’s Ænima. I’ve been stuck under an angry cloud as of late, and it seems my trusty umbrella has abandoned my side.)

There is something to be said about someone who can go from Beethoven’s 8th Symphony, to Thunderheist’s Jerk It 12”, to Harry Nilsson’s Pandemonium Shadow Show, to Rudimentary Peni’s Cacophony without the shimmering blink of an eye. What that something is, may be lost on the likes of me, but sometimes the logic breaks down in an extremely logical way. Get what I’m throwing down? No? Neither do I. If that’s the case, then you and I should be friends, or at least pen pals (suggested by someone who has never owned a pen).

Dig what you dig, and don’t listen to anyone who thinks they know what they’re talking about because, realistically, nobody really does. Take me for example. I enjoy annoying my neighbors, so much so that I create “neighbor annoy” playlists for my mid-day weekend adventures. Are they annoyed as I feel they SHOULD be, probably not. But does it make me happy none-the-less? You bet your ass!

Operation Ivy’s Hectic E.P. was a bit of a golden idol to track down. Thankfully, I didn’t have to run from a giant rock-ball, nor did I lose my greedy counterpart to a lightbeam-triggered spike wall in the process. Like most of the “need to have, gotta’ save up for” treasures in my archeological collection, I unearthed this 1988 7″ from the bowels of the illustrious eBay. eBay that as it may, I’ve never seen this, the original version of this fireball of a band debut, in any record store in all my collecting days. The winning bidder: my ears. 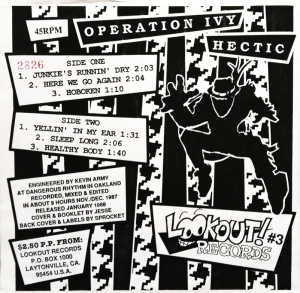 I’ve heard convincing arguments coming from both sides of the strong divide that is “purchasing records online vs. purchasing records at record stores.” On one hand, as a record collector, it’s our sworn duty, albeit unspoken, to support our local brick and mortars so that they may continue to flourish for future record collecting generations. On the other hand, should I really pay $10 for a G+ re-issue of Harry Nilsson’s Nilsson Schmilsson when I can get the same version in the same condition online for $1.50? Should the “support tax” really be 6.6x the price of the record in question? I suppose we all walk this “do the right thing vs. gimme a deal” line, so in the attempts of easing my conscience, some 10 years later, I finally find myself at peace with my online purchase of Op Ivy’s first record, and yes… I handed over a 10 spot for said Nilsson re-issue. So, my conscience is clear… for now.

Short lived but monumentally influential, Operation Ivy delivers furious fits of melodic rage with six piercing tracks in under 11 minutes, and includes the personal cornerstones, Hoboken, Junkie’s Runnin’ Dry and Sleep Long. Yet another soundtrack to my high school years, Op Ivy is one of those bands that, not unlike a fine wine or salted cheese, has gotten better with age, and the Hectic E.P. is the perfect start to this brief, yet unmistakably essential band.