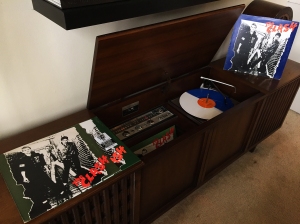 The Clash’s monumental debut was released 40 years ago today. Let that one settle in. 40… YEARS! Yup. We, all of us, are very, very old. Anyway, happy flippin’ birthday, The Clash! Though I don’t consider you punk, you’re one of my favorite bands. RIP Joe Strummer.

The words “Joe” and “Strummer” have always been synonymous with “inspirational” and “brilliance,” yes, even dating back to his 101’ers days. This Turkish rock God, originally christened John Graham Mellor, headed the phoenix rise and fiery fall of The Clash, dabbled in a bit of soundtrack work, sang a duet of Redemption Song with Johnny Cash, and during his untimely death, helmed the magnificent Joe Strummer & the Mescaleros. Global A Go-Go, the band’s 2nd offering, can be best described as emotional, acoustic punk for the retired generation too set in their ways to set down the bottle or empty the overflowing ashtray. It’s greasy-haired adult contemporary with a twist of stubborn jam-rock, but with decades of recording history under its belt. It’s heavily layered, often rambling (in a good way), and demands constant and consistent spins. 50 is a frighteningly young age to die. Joe Strummer, and his creative brilliance are greatly missed.

One wonders what Joe Strummer would think of his first Clash record being released on blue / white split vinyl for Black Friday… My interjections of Joe’s disdain for this release aside, she does make for a perfectly viable reason to fork over $29 for an album one already owns three times over. One never, ever goes wrong with The Clash, and this was, most certainly, $29 very well spent.

It’s The Clash kind of morning, kids; specifically their 1977 self-titled debut (1979 in North ‘Merica). The original UK cover, as you can plainly see just to the left there, showcases the sassy mainstays (until all hell broke lose with 1985’s Cut the Crap, of course) Joe Strummer, Mick Jones and Paul Simonon. Missing in all three cover variations (scroll down to see the others, won’t you?) is the 2-headed drummer, Tory Chimes and Topper Headon. 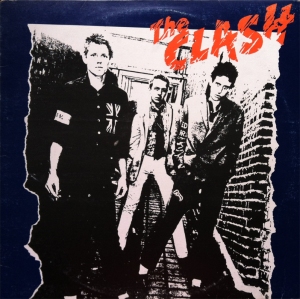 1979 Canada release. You see, it’s blue because it gets COLD up in Canada, eh!

Credited on the back as Tory Crimes (misspelling?), Tory Chimes was the exclusive drummer on the UK release. Topper Headon (credited here as “Nicky Headon”) is featured on 5 of the 15 non-UK releases. Both drummers are missing from this now iconic cover because, as wikipedia neatly puts it, during the time Kate Simon took this photo, Tory Chimes had (for whatever reason) decided to leave the band. So, there you have it. Mystery solved. Someone should remaster this album sans percussion, featuring just the three sods on the cover. That would make for an interesting listen, no?

So, a bit of interesting information… Chimes, Jones and Simonon were all in the band London SS before clashing with Strummer and future Public Image Ltd. guru Keith Levene to form The Clash. Mr. Levene co-founded Public Image Ltd. with Sex Pistols’ frontman, John Lydon, or as he is more commonly known, Johnny Rotten. So you see, it’s like, all tied up and connected, man! Clash it up today. It’ll help to keep the mental demons busy for at least the next 35 minutes. 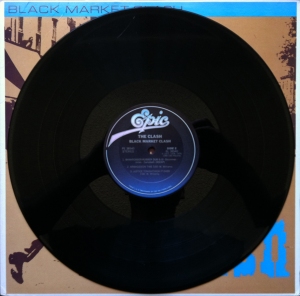 I had a cat for eight years. His name was Indiana Jones. He’s gone now… damn little screen pusher was always trying to get outside. Anywho, every once in a while I’ll throw on a record and stumble across one of his hairs. If you look closely at the pic, what looks like a deep scratch near the top is actually a black, white and gray Indy hair. Presumably, the last time I listened to this, or any “Indy album” was between the years, 1998 and 2006, or as I refer to them as, The Indy Years. Kind of like The Wonder Years, but you know, with cats.

So today, I raise two glasses. The first, a whiskey neat to pay homage to the late, great Joe Strummer. The second, a tiny glass of milk to my old friend, Indiana Jones.

Thanks for the memories, guys. 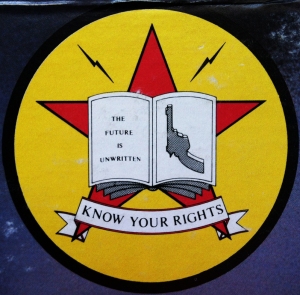 No. 1) You have the right not to be killed. Murder is a crime, unless it was done by a policeman or an aristocrat.

No. 2) You have the right to food money, providing of course, you don’t mind a little investigation, humiliation and if you cross your fingers, rehabilitation.

No. 3) You have the right to free speech (as long as you’re not dumb enough to actually try it).

These rights, as described by the late, the prolific, the prophet, Mr. Joe Strummer, are your responsibility to learn and digest. It is of the utmost importance that you educate (and mentally set free) your immediate family, coworkers, daycare professionals, gas station attendants, hot air balloon operators, garbage disposal fixers, and sad children with orange-tinted hair. These rights need to be understood, as I imagine Mr. Strummer would have wanted it that way.

For good measure, I’ve offered a little insight into my obsessive-compulsive nature. Apparently, on Thursday evening in late July, back in 1997, I felt it was a good idea to preserve the receipt to my purchased copy of Combat Rock. $3.98! The Clash were the soundtrack to that, the first summer out of 1) high school and 2) my parents’ home. The Clash were, and will always be, at least for me, a monumental symbol of freedom. It sounds just as gigantic and paradisiacal today as it did over 16 years ago.

Five days after the conclusion of a decade filled with orange, brown, swagger and abundance (the 1970s), the United States saw a paramount release that that would transcend every other album released throughout the rest of the decade. On January 5th, 1980, Americans received a message from across the pond. It was a message of conflict, disdain and unforgettable beauty. This message… the uncompromising London Calling.

Five days into the 80s, and the decade saw its best work… crazy. Released a few weeks earlier in its native land (December 14, 1979 in the UK), London Calling became the owner of the #8 spot on Rolling Stone’s list of 500 Greatest Albums of All Time. #8… all time. 8… out of 500! This isn’t news to the majority of you as you probably already own this treasured album, and if you don’t, I’ll pretend not to know you in public next time I see you… seriously… GET this album! 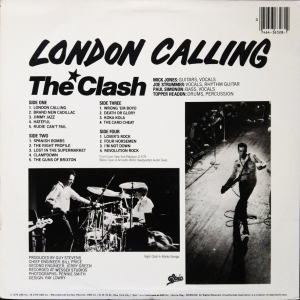 Bridging the weathered gap between Hard Rock, Punk, Reggae, Lounge Jazz, Rockabilly and Ska (to name a few of the many genres defining this “epic” album… it was actually released on Epic Records in the states, so HA!), The Clash were able to showcase their angst towards authority, their cry for better paying jobs, their thoughts on civil war, love, and the church, and they were able to do it by staying within the confines of the social attention span. The Clash found that the message of insolence, distrust, hope and liberation could reach more ears if the music was more accessible to a broader audience.

Everyone who has ever learned to type has written about this album, so anything I say here won’t be groundbreaking. I will however express my personal affection towards this gem, and try to offer its beauty onto others. I’m a London Calling pusher, essentially… and I’ve got a quota to meet, so shoot up!

Really quickly, I’ll get into this then I’ll leave you the hell alone. It was July 1997 and I’d just turned 18. I was sharing a room with my best friend and we were both in our infant stage of record collecting. He with his Jimmy Durante, Glenn Miller and Dean Martin, and I with my Beastie Boys, NOFX and Doobie Brothers. There is a little store in Madison, Wisconsin called Half Price Books. If you’re from the Midwest you’ve undoubtedly been there. It was at the East Side location where I found my calling of the London variety. I’d already owned 1982’s Combat Rock, and was eager for more from the almighty Clash. Anyway, to make a long, drawn-out story short, the first side to the first record (London Calling is a double LP, btw) instantly became the soundtrack to our summer, with Rudie Can’t Fail becoming our favorite, miss-quotable song (substituting “chicken-boo for breakfast” instead of the proper “drinking brew…” something I still do to this day).

Maybe it was because that summer saw us living on our own for the first time, but for us, London Calling equaled liberation. Few albums attach themselves to such monumentally important moments in an individual’s life. The acute notice these moments, and they never forget them. London Calling, for all its global importance, still manages to satisfy my local, nostalgic needs.

Punk freaks a lot of people out. It should. That’s its job. Well, not its job so much as its point.

When the physical force from the hand-shakers, the whistle-stoppers, the marketing executives and the self-proclaimed pretty faces (telling you what toothpaste “real” men prefer) strong-arms the poor, the isolated, the abhorred, the shunned and the ugly (a term invented by pushers of beauty products as a counter for what constitutes “beauty”), the thin line separating the “ordinary” from the “irregular” breaks. Wars are started over such actions. Lives are lost and serenity is disfigured.

“Anger can be power.” – Joe Strummer of The Clash

From the charred rubble of society rockets a familiar phrase longing to reach the ears of the desperate that question if such a powerful phrase could exist. A phrase silenced and eradicated by the powerful, yet so innate to our most basic of human instincts. The phrase: It doesn’t have to be this way. Never Mind the Bollocks, Here’s the Sex Pistols gave a voice to that phrase; a voice that, because of legal battles with the Magistrates’ Court, record label arrests, and outcries from the feeble masses, almost wasn’t heard.

I’m a believer in giving credit where credit is due. The Ramones are often credited as the first “official” Punk band, so, yay Ramones, but they don’t come close to matching the social impact unleashed by the Sex Pistols… and the Sex Pistols only released one studio album! Surprisingly tame by today’s standards, the music on Never Mind the Bollocks, Here’s the Sex Pistols is secondary to its message. The tracks are catchy, the lyrics are in-your-face and often intentionally hilarious. Well produced and professionally executed, this album isn’t near as abrasive as one would think given all the trouble surrounding its release. 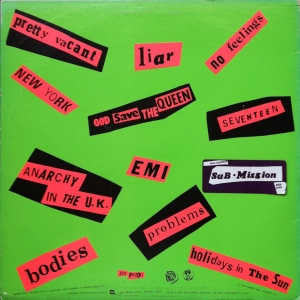 Punk is present to force the masses to question their decisions. The hoi polloi hate Punk because it makes them look at themselves and recognize their abundant shortcomings and their sheepish declarations. They know they’re feeding a corrupt and biased system but they don’t want to be bothered to remember. I know. I’m one of them. But the idea behind Punk, albeit a nightmare for some, is the saving grace for those whose voices are subdued.

Greed is a learned trait. The desire for power and wealth by means of silencing those who oppose you is the backbone of a Capitalist society. The Sex Pistols recognized this. They stood atop a mountain of vehement listeners and shouted, “It doesn’t have to be this way!”

Never Mind the Bollocks, Here’s the Sex Pistols is Shakespeare to authors, columnists and poets alike. It stands as one of the most monumental moments in music, and was a turning point in 20th Century history. It is, by all means, a necessity.